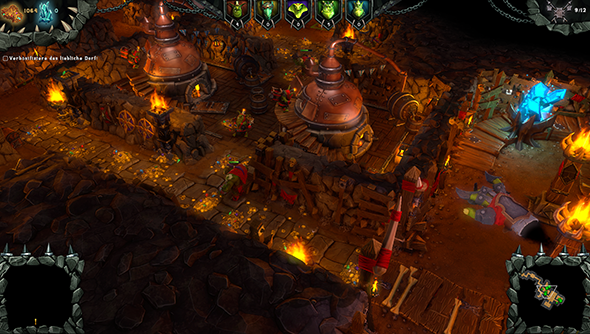 Dungeons 2 is the Tesco Corned Flakes of dungeon management games. In many ways it’s fairly indistinguishable from the dungeon keeping of Dungeon Keeper, insofar as you’re a keeper of a dungeon, and the dungeon that you keep is populated by minions who dig out rooms, mine for gold, research traps and fend off adventurers.

In fact, much of Dungeons 2’s idea-pilfering came about because fans of Dungeons 1 demanded a more Dungeon Keeper-like experience, one that was less about looking after heroes and more about carefully managing an evil underground lair. And to developer Realmforge’s credit, they’ve not stopped at merely emulating the Bullfrog classic, but have gone much further, adding their own RTS overworld twist.

(To close off the cereal metaphor, it’s a bit like they’ve thrown in fresh banana slices.)

Underground, things play out in Dungeons 2 almost precisely as they do in the leading brand. You’ve got your throne room, where your translucent ethereal form sits and issues commands. You cannot directly control your minions, rather you designate jobs for them to carry out. Using your magic floating hand you cordon off bits of solid rock to be dug out and turned into rooms. Any gold found while digging will be deposited in the throne room in a big shiny pile. This is one of the game’s main currencies, used to employ staff, build structures and maintain dungeons. 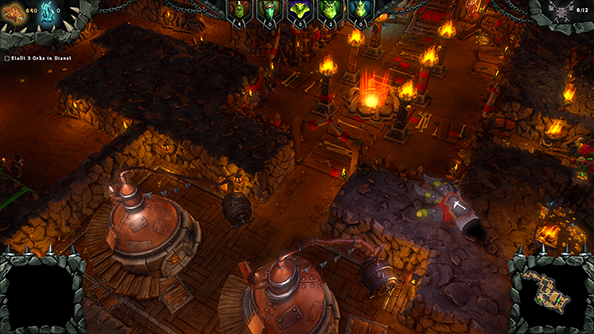 These rooms can be assigned various functions. A gold room will house all of the valuable treasures you uncover. There’s a room for brewing the booze your minions will start to demand. A hospital will allow injured minions to recover health. A goblin’s workshop will research new kinds of rooms and traps. Further, special rooms become available as the game progresses, such as crystal shrines erected around mana deposits, which provide the game’s secondary currency of lovely magical mana juice.

Different kinds of minions do different things. Some, like the imps, are general workers and diggers. You’ve also got orc fighters who, if they have nothing else to do, will totter around the dungeon sprucing the place up with timber supports and mood lighting. Goblins will use workshops to produce tools, which are units used to create traps such as spike pits and spring loaded treasure chests. 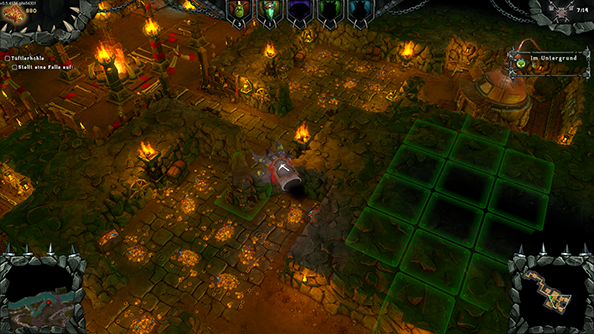 Later, you’ll have access to magical snake people with mana-powered magical abilities, useful for both healing and harming. You yourself, despite having no physical form, have a limited ability to cast spells too. Combined with your ability to pick up a dozen or so minions with your hover hand and drop them wherever you’d rather they be, you’re generally given a great degree of control over what happens inside your dungeon.

Outside of your dungeon however, things change. You’re no longer passively dropping orcs next to invading enemies and nudging them into a fight, instead you’re group selecting your forces with the left mouse button and directly ordering their attacks on chosen enemies with the right. It’s a basic RTS in the overworld, and its here that you’ll take the fight to the morally upstanding armies of humans and elves who have set up camps and outposts. You’ll have quest objectives up here that you’ll pursue while simultaneously building and defending your dungeon. 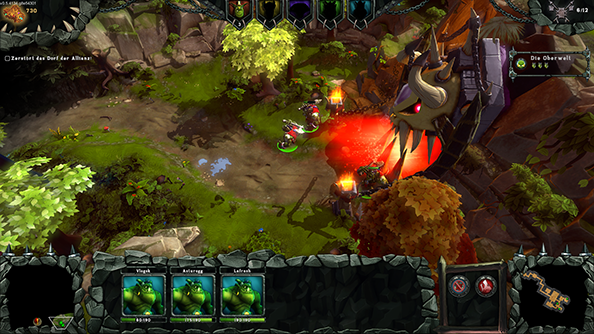 In the map I played, I was grabbing handfuls of units from my dungeon and throwing them through the entrance to the overworld in order to assist some potential new evil allies — the aforementioned magical snake folks — who were being harassed by a band of do gooders in the centre of the map. To reach them I had to adventure the long way around the fairly linearly structured overworld, through a forest, fighting off some wildlife and then returning to the underworld briefly to retrieve a massive blue, mana-bestowing crystal (which triggered a two-minute long siege of my dungeon as the forces of niceness tried to halt my progress).

These two spaces, the overworld and the under, can be switched between instantly, allowing you to quickly zip back to your base should you find yourself under attack. Destroying any enemy encampments near your dungeon’s entrance in the overworld will reduce the number of invasions you’ll experience. Your general marauding will also have the neat side effect of corrupting the environment around your units, turning the world from verdant, green and bunny-filled to dark, diseased and rat-infested. 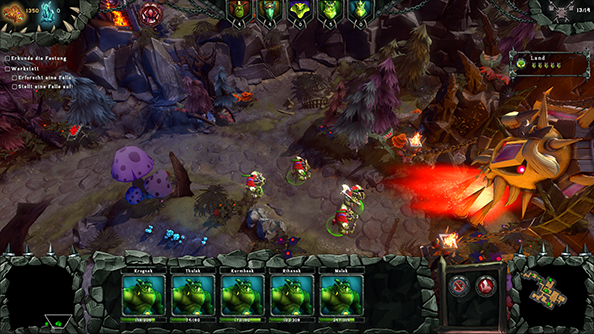 Given that the map was only just introducing the concept of mana, it’s safe to say we were looking at a snapshot of an early point in Dungeons 2’s singleplayer campaign. Later maps, you’d hope, will be less stiflingly hand-holdy and a little more diverse. Besides the campaign, which encompasses two factions and a mix of game modes, there’s a freeplay mode in which you can stretch your dungeon keeping skills to their breaking point, and a competitive multiplayer mode for up to four players.

And as much as Dungeons 2 is an audacious homage to Dungeon Keeper, the style of narration is very much lifted from The Stanley Parable too, starring a fusty and sarcastic British gent who plainly commentates your next objective in the present tense, becoming insistent, impatient and fourth wall demolishing when your actions fail to conform to his script. Obviously it stops well short of deconstructing the directed nature of videogame narrative, but it’s a pleasing enough means of reminding you of what you should be doing, originality be damned. 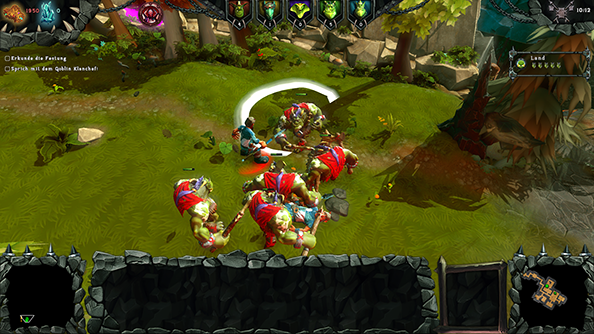 The overworld twist is Dungeons 2’s banana slices offering to the flaked corn cereal genre, bringing an entirely different form of strategy to the typical management style outlook of the imp-slapping underworld. Whether there’s enough complexity in that overworld’s fairly basic RTS meta-game remains to be seen however, as simply rampaging around the surface with as many fighters as possible seemed a viable enough tactic in the map that was on show.

Banana slices are nice either way, and we should appreciate them for coming along every now and then in an attempt to make our cereal better.