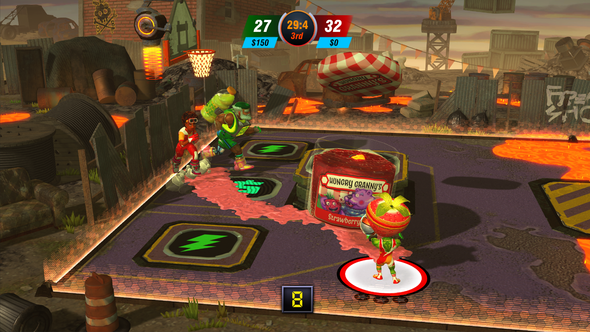 Back in the ‘90s, when Sega and Nintendo battled for supremacy over the home console crown, the race to accurately portray arcade games in one’s living room was in full swing. It was one of these classic arcade sports brawlers, Arch Rivals, which came immediately to mind as I glanced over the screenshots for Dunk Lords. This colorful basket brawler is the new game from Andy Hull, who you might know as the programmer of Spelunky HD.

Get ready for the arcadey goodness with a decent controller for your PC.

Dunk Lords is a two-on-two basketball beat ’em up featuring over-the-top special moves, devastating dunks, and game-changing equipment pickups. Imagine if NBA 2k17 had a baby with Mario Kart and then it grew up admiring Smash Bros. and you’re somewhere in the ballpark. Info on the title is somewhat limited at the moment, but from what we can tell the game contains a bear, a giant strawberry and some sort of flying pig on its roster of 16 ball brawlers. One would assume that Dunk Lords might be a purely arcade experience but it will also contain a single player mode in which you guide a talented young star named Slice in his attempt to become a true Dunk Lord. Until today, if someone called me a dunk lord I’d have assumed they were insulting me. Evidently, I was gravely mistaken.

Dunk Lords is scheduled for a 2018 release and you can check out the official website for more info.