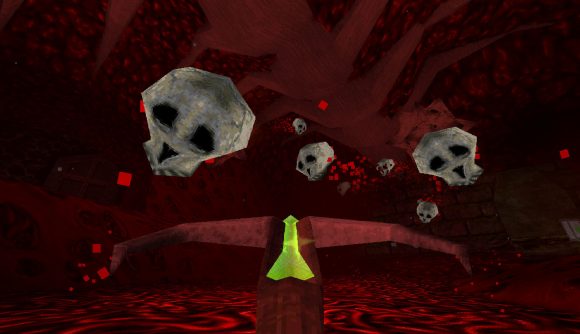 Dusk is a Quake-style throwback shooter that pushes both horror vibes and a goofball sense of humour. Dave Oshry, head of publisher The New Bloods, didn’t wait for any traditional sales milestones to announce the game’s success – no, we learned the metrics at the exact moment the game achieved 69,420 units sold. (Nice.)

Beyond the joke, Oshry goes into a bit more detail about how those numbers break down. The game garnered 8,000 pre-orders, sold 22,000 copies during Early Access, and has sold an addition 40,000 since it properly launched back on December 10. Oshry attributes the continued success in part to the Steam Winter Sale and Dusk’s early 15% discount.

“We sold an average of 1100 copies every day during the sale,” Oshry tweets, “and the momentum has continued post sale with 200-500 copies sold (full price) per day since.” Sadly, the continued success of Dusk means the game’s no longer at the meme number and has instead surpassed 70,000 sold – though there’s always 420,666 to shoot for next.

Dusk brings the best bits of 90s shooters together in a way that builds on the past while bringing that classic design forward, and the game’s continued success is well-deserved.