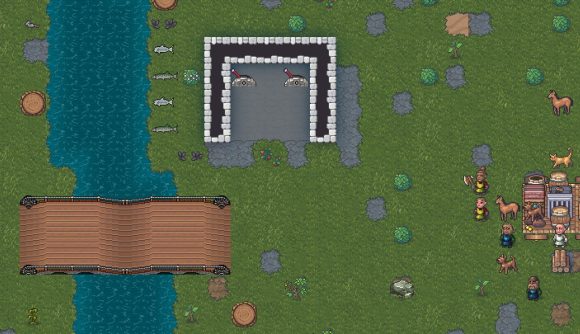 The Steam version of Dwarf Fortress seems to be getting pretty close now, but of course, “time is subjective” and so that could mean any number of things. What we do know is that we’re close enough to the Dwarf Fortress Steam release date to get a look at how drawbridges will work, and at a nice method for disposing of unwanted visitors – specifically, chucking them into a volcano.

First things first, though, and that’s drawbridges. Dwarf Fortress co-creator Tarn Adams has a new devblog up on Steam that shows off the new bridge artwork, as well as the look for when a drawbridge mechanism is activated. Bridges can be connected to levers to turn them into raisable drawbridges, which accomplishes two things: it makes the bridge impossible to cross and it shields anyone hiding behind the raised bridge. Handy!

The first example Adams shows off is above ground and is a two-sided drawbridge. The halves are each controlled by a separate lever, which are housed in a nearby building. The next example is a bridge over a moat dug in a cave, and there’s an alcove carved nearby for the control lever.

As Adams observes, running a moat below the surface can be dangerous due to the way water pressure works, and so it’s wise to make sure you’ve got floodgates installed to manage outflow.

The third example in the post shows off another zone type, called a ‘pit.’ Pits are used for throwing things into, and you can designate them wherever you see fit. In Adams’ example, it’s drawn at the end of a steel bridge that spans out over a huge lava lake. “The game doesn’t care what’s below the pit zone particularly,” Adams explains dryly. “Once a prisoner or beast is designated, a dwarf will bring them over and throw them in.” 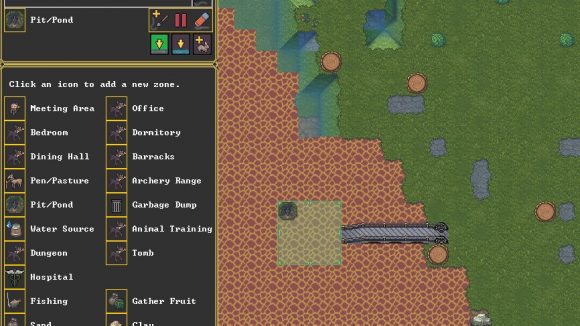 You can use this to create, say, a lion pit “and stuff like that,” Adams suggests.

We’ve got a list of the best games like Rimworld and Dwarf Fortress if you just can’t wait to start managing the heck out of some colonies.