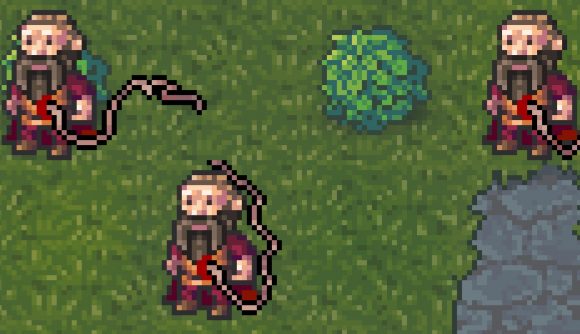 If you haven’t heard, Dwarf Fortress is getting graphics. Speaking of graphic, it turns out it’s going to be pretty grisly – dwarves will actually be seen dragging their disembowelled innards behind them after being injured. That’s according to the most recent Dwarf Fortress update on Steam posted by creator Tarn Adams.

The post is titled ‘Mini-maps and disembowelment‘, which is a phrase that we’re fairly sure has never before been seen in the English language. As you might expect, it starts off by showing the new Dwarf Fortress mini-map system, which thanks to the use of individual pixels rather than ASCII characters is able to show a lot more detail on the local area than is possible in the existing text-based version of the classic colony management game. Neat!

Adams rather abruptly shifts gears at this point to show off a work-in-progress image of three dwarfs who have had abdominal injuries. There are flesh-coloured snakes trailing behind them at various angles. Yes, it’s their intestines, and we hope the dwarves are on their way to the nearest medical facility.

“Note the directionality – as the dwarves walk about, the earthworm-like viscera drag around behind them,” Adams writes, disgustingly. “This normally involves a bit more blood, but we’re still working on it.”

Well thanks a lot for that, Tarn. Long-time Dwarf Fortress players know that the injuries dwarfs can suffer in the game get extremely brutal, and up until now, we’ve been left to our own devices to imagine what they actually look like. Dwarves can be (and frequently are) trampled by elephants, maimed by monkeys, set on fire, drowned, and otherwise traumatised by a host of hazards in their environment. It seems as though Bay 12 Games and Kitfox Games have decided to go all in on representing these… graphically.