Claims of ‘reinventing’ the real-time strategy genre are nothing new, especially in recent years. For every remaster of Age of Empires or Warcraft that gets thrown out, there are dozens of new RTS projects that struggle to gain traction, all believing they’ve got what it takes.

DwarfHeim is a new co-op RTS game that’s just released into Steam Early Access today. Its central theme is working as a team in 3v3 matches; there are three classes one can play – Warrior, Builder, and Miner. They each have their own specific role to play, and each have their own unique mechanics and units. No single person can achieve victory.

The Warrior and Builder have the most traditional RTS gameplay loops, with the former focusing on attacking and map control, with the Builder developing up the settlement and making sure there are plenty of defences. The Miner is more concerned with harvesting the resources needed to fuel the other two’s development, and their game involves a lot of conveyor belts and production lines, creating a weirdly Factorio-style substrata beneath DwarfHeim’s Warcraft-like veneer.

Speaking of substrates, all DwarfHeim maps have an ‘underground’ layer where all the shiny minerals are found. You can access it via any one of the predefined entrances that litter a map.

There’s a main PvP mode called Conquest, but the developers are also trying an ‘all things for all RTS players’ approach by offering plenty of other options as well. Survival is PvE mode that has been likened to They Are Billions, while Skirmish is another PvE experience that revolves around set challenges. Finally, there’s Sandbox which is meant to be a more chill, creative mode.

Developer Pineleaf is aware that, despite the raging popularity of multiplayer games across other genres, playing strategy games can often be a solitary passion. You might not have two other friends to play with, or you do but they’re not convinced about buying another game. Coming sometime around DwarfHeim’s first patch, the devs will be introducing a ‘Friend Pass’ system that will allow someone who’s purchased the game to invite two others to try it out for free. 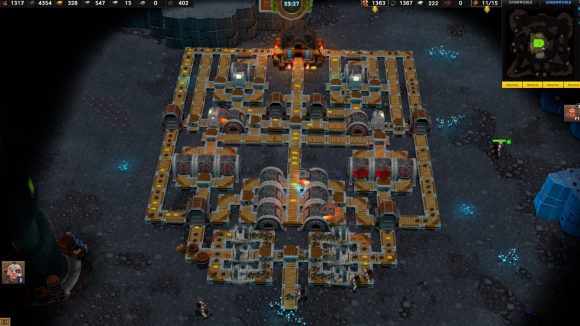 There are limitations: you can only invite friends to play the Conquest mode. Out of the four main modes this is the only one that can’t be played solo. There will be a separate ‘limited’ version of the game Friend Pass players can download, which will also contain the tutorial. There will also be a limit on the number of matches Friend Pass players can play. You can find out more information via this AMA the developers conducted.

There is a full roadmap of additional features planned, which is rumoured to include a narrative campaign. The developers have stated they’ll share more about this sometime after launch.

Related: How about some more indie games

DwarfHeim is available via Steam Early Access starting today. At the time of writing, it’s aiming for a full release in Summer 2021.