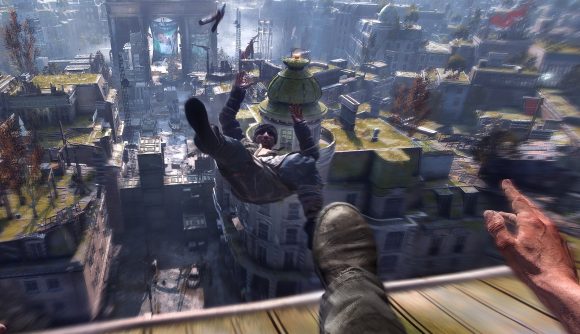 When the original Dying Light launched at the beginning of 2015, the world was not in need of another zombie game. But at what was perhaps the peak of Walking Dead hype and the start of zombie burnout, Dying Light’s parkour system made players sit up and take notice. Dying Light 2 aims to do that again by expanding and improving on the original game’s fluid and physical movement system.

Techland’s lead gameplay designer Bartosz ‘Glova’ Kulon tells us that some of the most dramatic additions to the original game’s moveset haven’t actually been all that hard to implement. It’s getting moves – such as wall-running – to work with the rest of the motion system that’s the real challenge.

“The wall-running itself is not that difficult,” he explains. “You detect a wall-run surface, make the player stick to it, and play a good animation. The problem is that the surface could be a wall that also has ledges for climbing. So we have to avoid those ledges, because preventing wall-running on surfaces that aren’t even would actually limit the move a lot.”

Kulon says that having each of the new moves in Dying Light 2 interact with the rest of the possible moves, such as rope-swinging or gliding, was where the team ran into its toughest challenges during development. The underlying idea was to fix areas that they wanted to improve in the original while adding more movement options that all felt completely natural.

“We wanted our players to actually feel the difference in how they play between titles. That’s why The City is so different,” Kulon tells us. “We had to analyze and build The City in collaboration with the player and AI moveset so the environment would support them. This complexity forced us to find solutions and balance when building The City and preparing the movement system.”

Kulon says The City’s streets wound up being too wide at first, making it impossible for players to leap from one building to another. That prompted the addition of new environmental elements, like street lamps, that can be used to bridge large gaps. But Kulon says that also gave the movement team the opportunity to think up ways to extend the player’s jump distance with equippable tools and unlockable skills.

“The whole parkour system, which we call the natural movement system, is built from small and big subsystems that need to collaborate and switch between each other,” he explains. “This is something that is really difficult.”

Kulon hopes Dying Light 2 will once again expand the boundaries of what’s expected in games in terms of player freedom.

Remember to join us to explore the vast open world of Dying Light 2 Stay Human on September 30th at 11 AM PT / 9 PM CEST.
We'll see you on Twitch: https://t.co/ppK4Ylawp3 pic.twitter.com/rN9mdOxTta

“Looking back, the first game pushed the industry to add freedom of movement to their games—it wasn’t nearly as common as it is nowadays,” he says. “Dying Light gives players extraordinary freedom in parkouring. So we really pushed our creativity to the limits to be able to expand on the system from Dying Light 1 and set a new benchmark for how natural movement should look in games in the next few years.”