So you want to know how to repair weapons in Dying Light 2? Unfortunately, you’ll need to reckon with the fact that your favourite rusty pipe or two-handed glaive is going to break eventually. Weapons in Dying Light 2 have a durability stat and unlike the first game it’s not a simple case of just slapping on a repair kit to keep it going. There are no Dying Light 2 inhibitors for swords, sadly.

Repairing weapons in Dying Light 2 is not a formal mechanic as there are so many weapons available. The general assumption is that when you find a weapon you use it until it breaks, and then move on. But what if you find one you really like and want to keep using it as long as possible?

We’ve got some good news and some bad news. The good news is that it is possible to repair weapons. The bad news is that not all weapons are repairable, and even those that are have a limit on how many times they can be patched up. Here’s everything we know about repairing weapons in Dying Light 2.

How to repair weapons in Dying Light 2

To repair a weapon in Dying Light 2, you need to install a weapon mod. Weapons have up to three slots for installing gear mods that can boost all kinds of stats. Crucially, installing a mod also adds 50 points of durability which gives your weapon an extended lease on life.

You can’t swap out or change mods – once a slot is full, that’s it. This means there are only up to three opportunities to boost a weapon’s durability. As a general rule of thumb it’s worth waiting until a weapon is near breaking point to install a mod, otherwise you don’t get the full benefit of the durability boost. 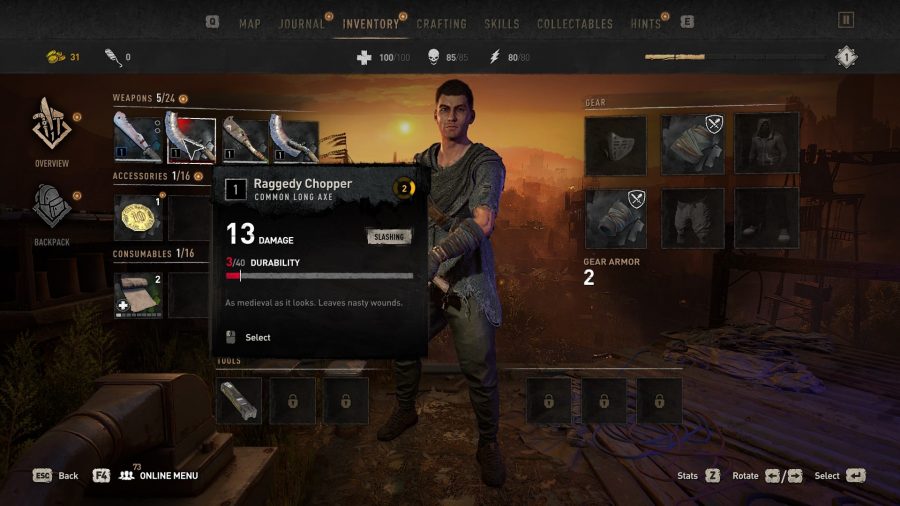 The exceptions to this are unique legendary weapons, which never allow you to install mods of any kind. No mods means you can’t get that extra durability, so enjoy your time with them while you can.

That’s everything we know about repairing weapons in Dying Light 2. For more guides, find out how long Dying Light 2 is as well as all of the safe code locations. If you really want to keep your weapons, perhaps there are other zombie games that will let you.