Dying Light: Bad Blood only needed ten minutes to prove it was more fun than most battle royale games. There are two standout reasons for this. First, the fact that you have to deal with ravenous zombies as well as online players while trying to survive eliminates the mid-game lull you might get in a Fortnite or PUBG match. Second, the accomplished parkour from the now three-year-old zombie smasher ensures that chases across the map are always dynamic and thrilling.

From what I’ve played, Dying Light’s answer to the battle royale phenomenon deserves to be separated from the crowd. There are reasons for this beyond its quality, as, in Bad Blood, only 12 players are dropped into a portion of the original Dying Light map – which has been adapted to suit this chaotic free-to-play spin-off title. Sure, no one has any weapons or items, and so you have to search your surroundings in order to arm yourself. But the shared goal is not simply to be the last player standing: you must collect blood samples from hives marked out on your minimap.

These hives are protected by AI-controlled zombies whose strength is dictated by the level of the hive they belong to. To even the odds, you’re able to level up by killing the infected and stealing a hive’s samples, which increases your health and damage output. Once you have collected enough samples you can reserve your seat on the helicopter that’s flown in to whisk you away from this zed-infested hellhole. But, here’s the rub: there’s only one seat. So you need to be quicker than every other player in order to make it out of there alive.

Bad Blood isn’t actually much like a battle royale game at all, then. Yet, that’s what it’s been understood to be by those who haven’t played it. This much is confirmed by Bad Blood’s producer, Maciej Laczny, who says ‘battle royale’ is a banned phrase in the studio. 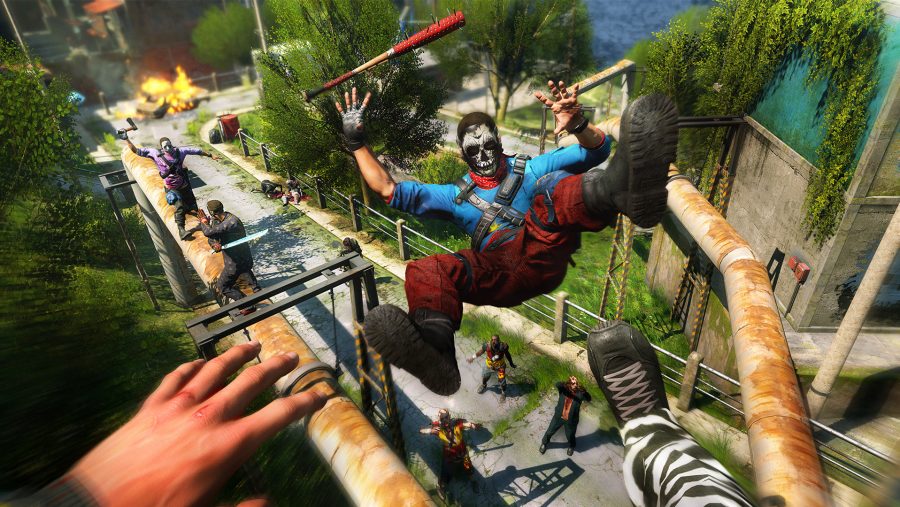 The warning implied in that name is not empty. In the several rounds of Bad Blood I play at Gamescom 2018, I’m ruthlessly cut down by aggressive and devious enemies alike. During my first go I’m rushed by an especially bloodthirsty human opponent – an important trait here, it turns out. My rival gave my first attempt at patient play short shrift. I decided to stick to the shadows as I learned the ropes and tried to gather a variety of weapons, armour, and items before taking on my first hive. Clearly I wasn’t stealthy enough as the thief tracked me down and made off with my carefully procured gear. At least I succeeded in my mission to get myself a load of blood, it just happened to be my own sprayed all over my clothes as my brief life was snuffed out.

I have better luck in the next round, but it didn’t last long. On this occasion I manage to get the requisite blood – with the evac zone marked on the map for all to see. The other remaining players now know that one of their number is on their way to victory; I must press home the advantage.

What follows is a mad dash to the finish, an intoxicating blur as I make the most of the game’s map design and parkour system to effortlessly weave between side streets and clamber on rooftops. I thought my choice to take a subterranean tunnel during the last leg of my sprint would see me through until an evil sod – desperately short of blood samples – heads me off. I learn what’s at stake in Bad Blood the hard way.

“Players will give you so many unpredictable situations that you‘ll have to learn something new, that’s why we call it Brutal,” Laczny explains. Since Dying Light: Bad Blood is both a PvE and PvP game, if you don’t have sufficient skill in both, you’ll be punished. “There can be matches that no one wins but that’s life,” Laczny says. “If you’re not good enough the night will come.” 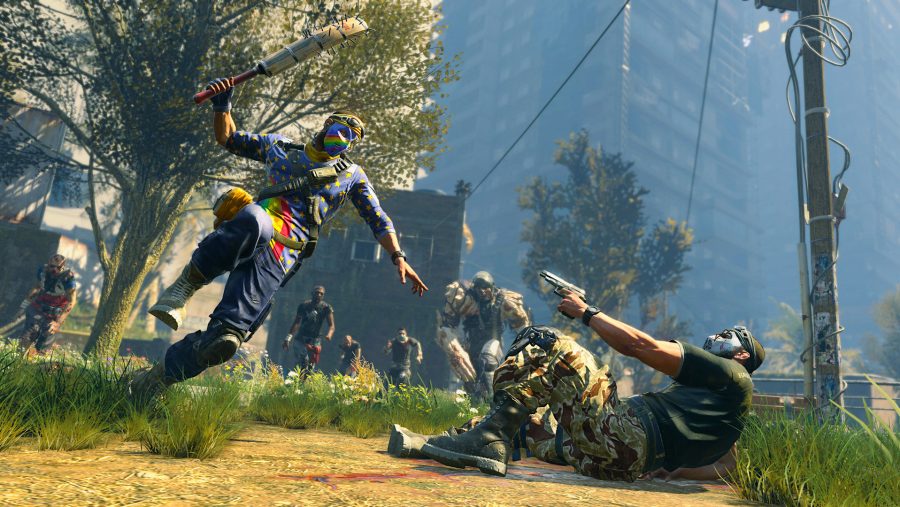 As each player approaches Bad Blood differently – having their own tactics and skills to play to – the formulation of any strategy is difficult. That was hard enough when there were only six players to a match but Techland has since increased that number to 12. It’s still a world away from the 100-player matches of your standard battle royale, but keeping the number of participants low makes for a better balance between PvP and PvE, according to Techland.

We spotted a number of balancing issues in the first six-player version of Bad Blood at GDC 2018. But it was easy to see, even then, that the blend of parkour and the last man standing setup was going to work really well.

The developer has also discovered that the number of people in a match affects other factors too. Laczny and the team “saw that behaviours are different when players see more players on the map – they tend to be more edgy on both sides.” Those who enjoy confrontation always seek to take a match by the scruff of the neck, but having more players also encouraged them into using their environment to get the jump on their rivals. Of course, there are especially skilled members of the development team that can gain victory without getting a single kill, relying solely on the power of Dying Light’s parkour.

Map tweaks since the game was first announced help facilitate a parkour-focused strategy and make traversal more fun than in any last man standing game. The various routes over buildings or beneath them through tunnels make fleeing both a fun and tactically-sound option, and the desperate races to the helicopter are intense.

“We changed the map quite a lot for different chases,” Laczny explains, “the evacuation points are in different places, we chopped some buildings down, and we opened up quite a lot of interiors so we can go different ways to avoid conflict.” You don’t just have zombies chasing you, players can come at you from all angles, from above and below. Bad Blood’s map will take hours to master. 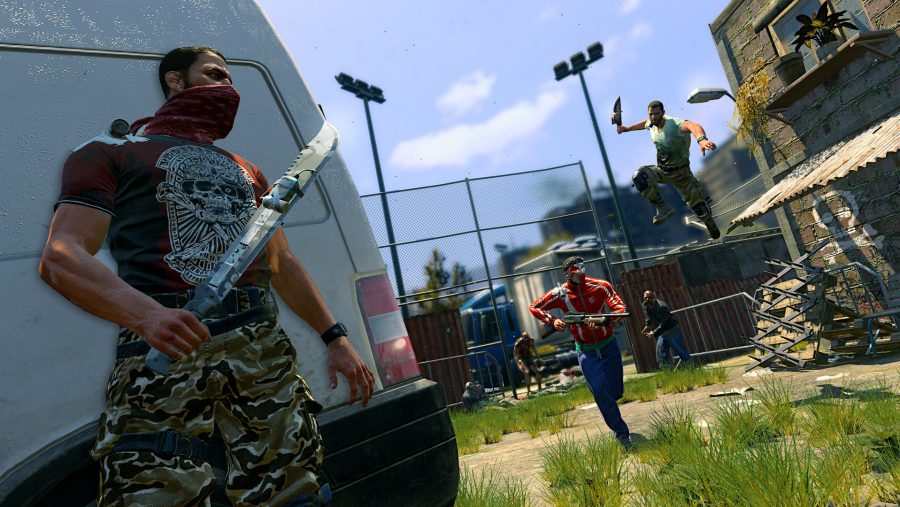 Now we got Bad Blood

As you might hope, Bad Blood will have more than one map – in fact, the team is already working on a second. To that end, Techland is not short of ideas on where Bad Blood can go next, even if it “will probably not go for last man standing games” in the future. “We have ideas for approximately 50 more weapons, new characters, new customisation for players,” Laczny says, “we’re thinking about some really crazy stuff.”

Veteran king of the hill players will be used to weekly updates landing in their favourite games. However, given the size of the team working on Bad Blood – between 15 and 20 – the resources will struggle to stretch to the prolific rate of refreshes we’re used to for, say, Fortnite and PUBG. In fact, during my demo I hear that the team was nervous about showing off the game at Gamescom. This is due to the team effectively having to make three games at once: for Gamescom, PAX, and global playtests before an Early Access launch in September.

But Techland’s work is paying off. The team’s claims that this is not a battle royale game isn’t a bid to disguise it as any sort of copycat cash-in; Brutal Royale isn’t a shameless marketing ploy. When I predicted – albeit obviously – that the battle royale genre would go from strength to strength this year, this was the kind of game I hoped to see. This is a mode that uses aspects of last man standing games in a way that makes sense for Dying Light.

Dying Light: Bad Blood is striking out on its own by enriching its existing zombie parkour gameplay while adapting the basic tenets of the battle royale as a springboard, not a rulebook.