Hello! This isn’t a review. Sorry! As you might already know, press weren’t given review codes for Techland’s zombie parkour romp, Dying Light, until yesterday, and a day is not long enough to digest this rather large game.

I’ve taken a break from caving in zombie skulls with rusty pipes and leaping across buildings like an urban ninja to share my early impressions, though. After this, it’s back to the slums of Harran with me. 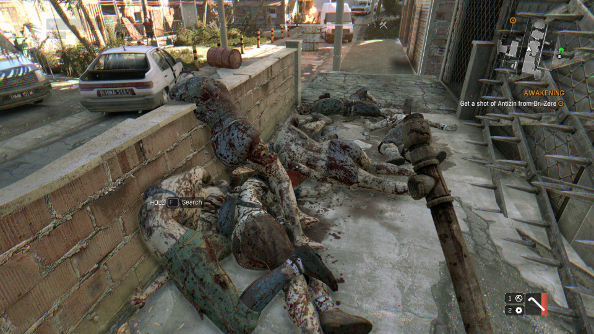 Dying Light chucks me into a hell hole and immediately takes control. There’s a bandit attack, a zombie attack, screaming, shouting, hitting, and I just have to watch, passively. Then it’s time for a tutorial chapter! Gosh, enough of them please.

The prologue is a bit rubbish until right near the end, teaching the basics of playing a video game while a man on the radio calls me a noob. It’s not an auspicious beginning. Not until I start exploring the city.

Dying Light’s parkour is possibly the best since Mirror’s Edge. It’s smooth, dizzying and has made me hold my breath so many times that beetroot is now my natural colour. The slum area of Harran probably looked foul before the zombies took over, so it’s not exactly a tourist spot, but it’s the perfect playground for climbing and jumping around like a loon. 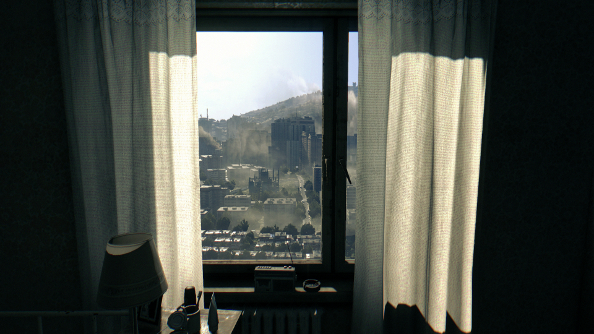 Looking across this dirty city quarter, I can see routes everywhere. On roofs, through homes, under holes in fences and over balconies. Cars become stepping stones, and rooftops become sanctuaries where I can better get my bearings. And best of all, I’m able to avoid the zombies.

The weakest of Dying Light’s shambling monsters – and most common – are a sorry bunch. They moan and shuffle along, or stand there and take a beating. Sometimes they are polite enough to stand in an orderly queue, or fall over and let me smack them around. The only threat to me at the moment is my own inadequacies.

Dying Light’s got that RPG DNA, you see, like Dead Island, like Far Cry, and that means you have to start off as a puny weakling. It’s a tiresome trope, especially when the protagonist is meant to be some super secret agent man. I can make a few flailing swipes with my pipe, and then I get exhausted, and the game reminds me to fall back. And thanks to my ineffectual weapons, it takes more than a few swipes to make the undead dead. 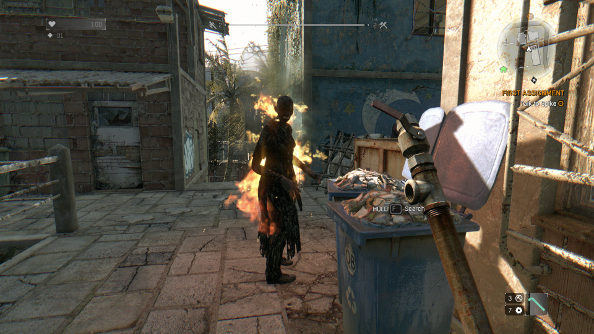 So combat is a miserable slog. But there’s a glimmer of hope. I’ve already unlocked a few new abilities, letting me grapple monsters and stun them with a knock on the head, and a fancy weapon dropped from a special zombie – a hulking brutish fellow – is making quicker work on them too. Things are definitely getting a bit more interesting. And skill points appear to be doled out fairly generously.

There are three trees, and skill points are generated separately for each. Bounding around, jumping off every roof, grabbing every ledge, gives me skill points to spend on my agility tree. Beating up the undead gives me points for my power tree. And surviving encounters gives me points for my survival tree. It’s a more organic way to give out experience, and one that promises constant character progression.

The prologue slump is behind me, and I’m starting to get into a rhythm, bouncing between parkour and fighting, using the terrain and the occasional explosive fuel tank to make surviving a doddle. 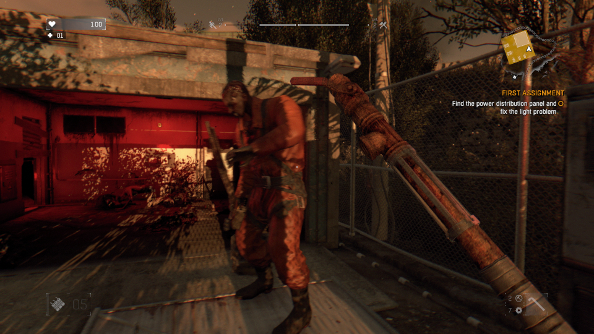 Unfortunately, my rooftop adventures keep being interrupted by people pestering me on my radio. They’re handless and they always need my help. I have yet to be given a compelling reason why I should care, aside from the typical fate of the world nonsense, so it’s hard to sit still and listen to them harp on.

So far, Dying Light has been pretty po-faced, in stark contrast to the blood-painted tropical paradise of Dead Island’s Banoi, and its colourful inhabitants and visitors. Techland’s previous zombie game was deeply flawed, but it had character and a sense of whimsy, and that’s missing from Dying Light. The setting is dreary, and so are the people that populate it. I did spot this little nod to another zombie game, though, and that gave me a bit of hope. 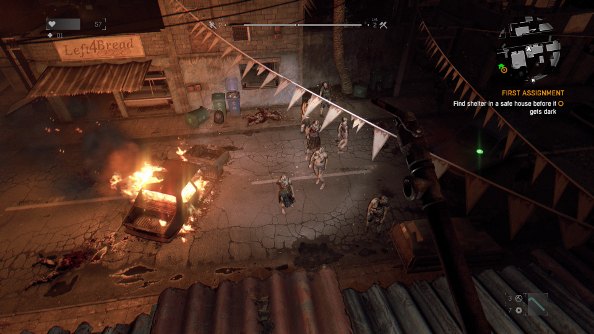 I’ve been encouraged the last couple of times I fired the game up. Traversal continues to be a delight, and I’m starting to build interesting weapons, like throwing stars, finishing my transformation into urban ninja. The undead won’t even see me coming, not that they were particularly alert before.

There’s potential here, and I want to see where Dying Light goes with it. And now that I’ve unlocked co-op, I know what’s on the cards next.