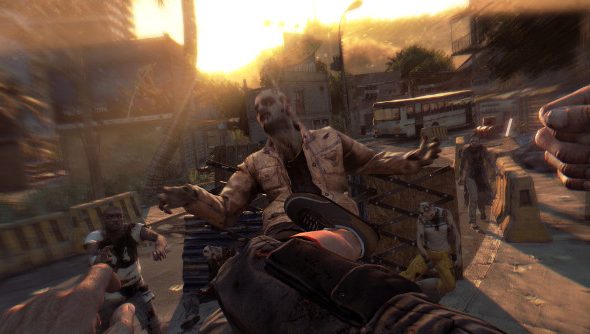 VR is the biggest thing in PC gaming right now, and developer Techland knows it. Showing us their zombie survival game Dying Light, the star of the show was the Oculus Rift. A virtual reality version of their dead city is they’ve been working hard with, battling against framerates and dual-image rendering, but they think they’ve cracked it.

“You can already plug in Oculus and play and it’s pretty good,” explains the game’s lead designer Maciej Binkowski. “We’re definitely going to support Dying Light when it releases.”

Strapping on the Oculus to experience Dying Light in VR, we’re transported to a mediterranean-looking city scape with a colossal tower at its centre. Clambering up it feels both surprisingly natural but astonishingly nauseous; fear of heights definitely apply. Slipping from a ledge and plummeting 150 feet to an exceptionally solid street feels almost exactly as you’d expect.

It’s not quite perfect though. “There’s still stuff we need to adapt, like how the camera works and the UI, stuff like that,” says Binkowski. The team have been getting plenty of support from Oculus, and should they be able to fix some of the camera issues and the almost unreadable HUD then Dying Light could be an interesting VR showpiece.

Techland have been working hard for months on Oculus support. For Binkowski, VR isn’t just a pet project. He’s adamant that it will be a key feature of the game. “I think it’s the absolute perfect game to experience in VR,” he says. “I’m really looking forward to getting it, because it just feels really visceral.”

It won’t be a bullet point on the back of the box though. “We don’t really know how long it’s going to take to release Oculus, and we release in January,” he says. “But if they’re ready, we’re going to be ready.”