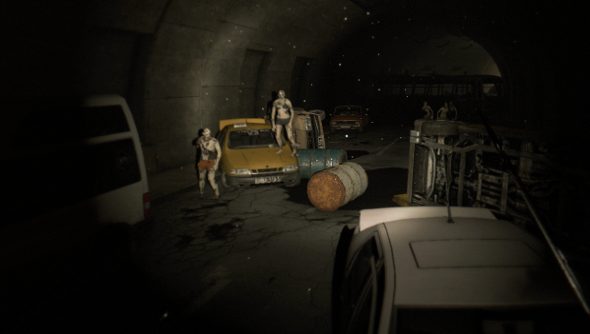 Techland has announced the release date for a new slice of Dying Light DLC, titled The Bozak Horde. Who is Bozak? What’s his horde all about? Find out when it launches this weekend, or below, where I explain what this DLC is and render these questions all a bit unnecessary.

It’s a bit strange to think that, back through the mists of time, you could maybe get away with calling zombie horror nuanced because, in some cases, they were like mirrors reflecting things like human excess and man’s inhumanity to man. Humans are the real villains, they’d reveal, and we’d all nod and say, “Oh, very clever.”

I think that well’s run dry now. It’s been done to death, particularly in games where it seems like you can get away from the armies of mentally ill but thoroughly alive people who, for some reason, now just want to kill everyone. Sometimes by forcing survivors to participate in elaborate challenges.

The titular villain in Dying Light’s DLC is one of those unfortunate people. Bozak’s a “deeply-troubled psychopath,” according to Techland, who has set up a series of challenges for teams to tackle, while they also try to beat each other’s score. When I say challenges, you can assume that I really mean waves of zombies and, the trailer suggests, bombs.

If you defeat Bozak’s horde of zombies, you’ll be rewarded with a special stealth weapon, the compound hunting bow, and you might learn more about what’s driven Bozak to creating this unpleasant event. Maybe a serious dearth in game shows? The big question is what is the deal with his mask. Is it from the goth branch of Anonymous?