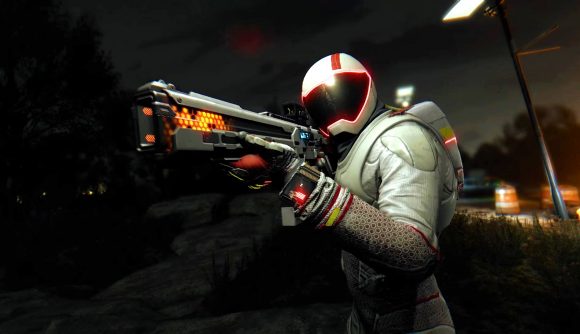 There’s an official Dying Light 2 release date now, meaning we’ll be seeing what’s next for Techland’s open-world zombie game in the near future. In the meantime, however, there are still things happening in Dying Light’s original setting – and sometimes, it can be a little distracting. A new bundle arrived today, and with it, a strange event that’s sending zombies flying all over Harran.

The new Astronaut Bundle is here, you see, and it comes with some new bits of zombie slaying kit. There’s a new space-themed outfit, complete with a cool helmet and some fall damage reduction, plus a laser rifle, stasis pistol, a skin for your buggy, and a Destiny-esque machete that changes its bonus damage effect after several consecutive hits.

Whether you decide to buy the new bundle or not, you may notice things have changed in Harran – specifically, the physics. To go with the Astronaut bundle, the gravity has been turned down significantly. Jumping will result in stupendous leaps, and each time you brain a zombie with a lead pipe or cricket bat, they’ll float peacefully away after ragdolling.

This is pretty hilarious in action, but if you haven’t finished the main campaign, it could be a bit distracting. Fortunately, you can turn it off. Select ‘options’ from the main menu, then select ‘online’ and set the ‘community event participation’ option to ‘off.’

Gravity should return to normal once that’s done. Alternatively, you can join in the fun and start batting weightless zombies around the city.