Dyson Sphere Program has hit Early Access with a head full of, well, Steam. It’s a game about building and automating production lines, and if you’ve ever played Factorio, you’ll have a pretty decent idea of what to expect. There are some key differences between Dyson Sphere Program and Factorio though, and if you’re new to the genre, the English translation may leave you with questions. Don’t worry – this guide will get you started, and you’ll be building stellar superstructures in no time flat.

The name of the game in Dyson Sphere Program is space optimisation, and to do that, you’re going to need to be thinking ahead. To start out, you need to set up basic resource extraction, eventually turning the resources into advanced finished products – so having an idea of how you want things to flow when you have multiple smelting, assembling, and research facilities is key.

Bear in mind that this guide is just a jumping off point, meant to familiarise you with the basic controls and concepts that form the foundation of Dyson Sphere Program. 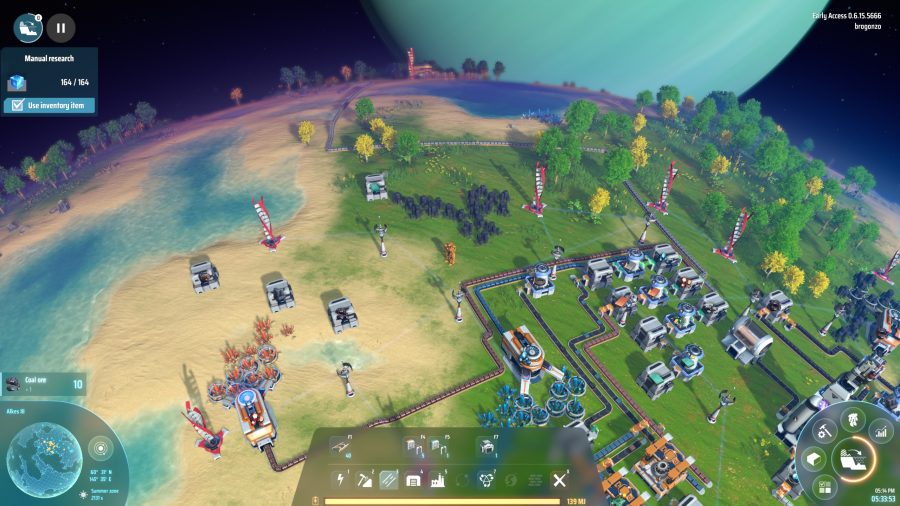 In Dyson Sphere Program, you control a single mech, which mines resources and fabricates basic materials and products. Your mech needs fuel, so make sure to tap the inventory key (E, by default) to ensure you’re keeping the reactor topped up. You can burn just about anything in the reactor: start off by cutting down some trees and burning logs and leaves, and then work your way up to stacks of coal and carbon bars.

More metal? Check out the best mech games on PC

As you’re getting your factory up and running, you frequently need to build storage containers and conveyor belts. You can build a bunch of these at once, or set up dedicated factory lines to handle it, but in the early game the easiest thing to do is to assemble them as you need them using your robot’s internal fabricator. Keep some copper and iron ore in your inventory at all times, and you’re able to pop together just about anything you need in the early phases of the game.

You don’t have unlimited inventory space, though. The solution to this is to build boxes and use them at every step of your production lines. This will create stockpile “nodes” you can drop by to quickly pinch a particular material or component, and they act as buffers if something gets gummed up in the supply chain. 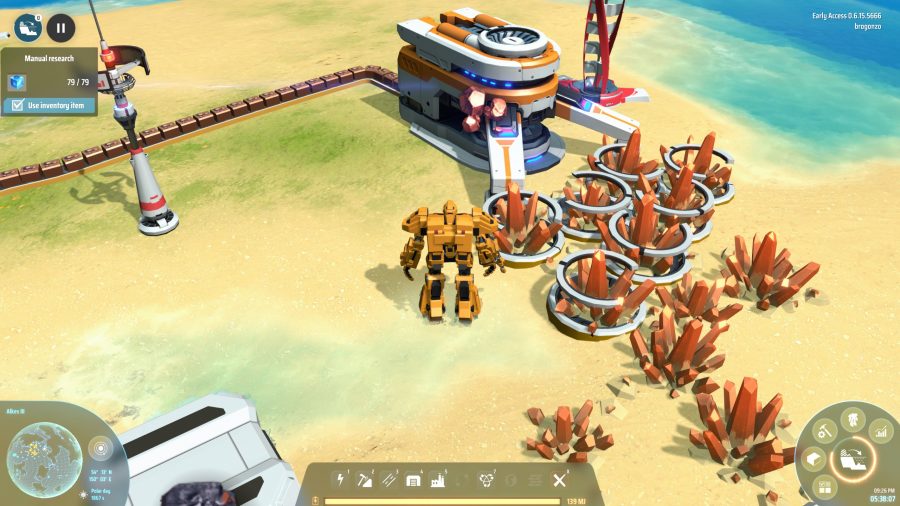 Your first task after landing on your new home planet, and after recycling your landing pod, will be to start mining resources. There are several raw resources available in Dyson Sphere Program, but the ones you need to be concerned about right away are iron and copper, with stone and coal next in line. Explore your planet until you find an area that has all of these nearby, then set up a mining machine to start digging ore out of the ground.

We suggest starting with iron, which appear as clusters of blue crystals. In build mode, position your mining machine so that it’s covering as many crystal clusters as possible – preferably six or seven. The more clusters it’s covering, the faster it will produce ore. You can tap R to rotate the machine’s blueprint in the four cardinal directions, or hold down Shift-R to rotate it clockwise. You probably need to do this in order to cover the optimal number of ore clusters.

Mining machines need power, so set up a wind turbine nearby. Build these frequently – your power requirements are going to scale up pretty fast as you get your operation underway. Don’t worry, though – they’re cheap and they’ll keep your grid going for quite some time as long as you keep building them.

One approach to power is to build your turbines around the perimeter of your base, and then use power pylons to cover the interior. Don’t worry too much about that yet – you can always dismantle these structures and pop them up again if you need to make room for new buildings. You’ll soon need to upgrade your power generation with the use of thermal power plants, so check out our in-depth guide to Dyson Sphere Program power for the best ways to generate energy, as well as our Dyson Sphere Program hydrogen guide to generating a near-infinite flow of hydrogen to power them. 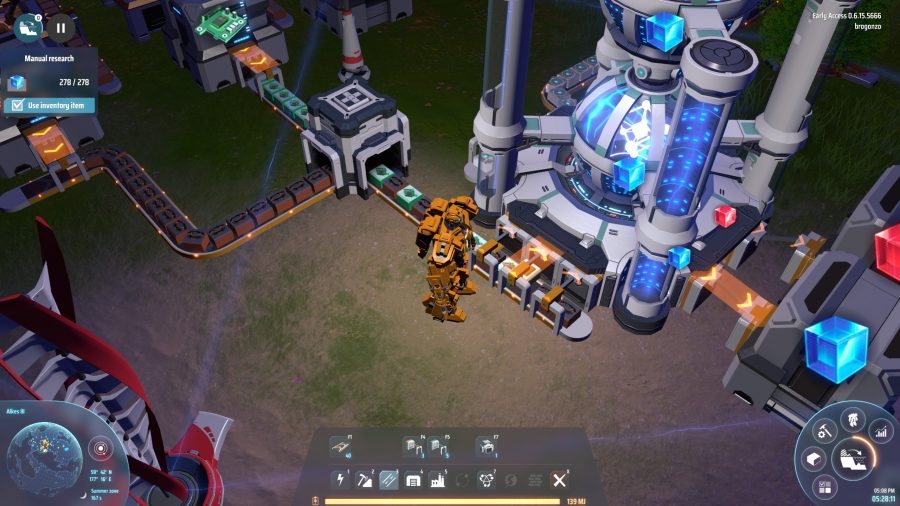 When you start out in Dyson Sphere Program, the logistics tools available to you are conveyors and sorters. Conveyors form the long beltlines that take items from one place to another, and sorters are the little arms that take things out of or put them back into things.

Provided you’ve got enough iron ore in your inventory, your mech can fabricate both conveyors and sorters on the fly. Use the plus and minus buttons to adjust how many you want to make at a time – with conveyors, we find it’s easiest to do stacks of ten (we use a lot of conveyor belts).

There are a few things about conveyors and sorters that aren’t covered well in the tutorial just yet. First, rather than setting your conveyors up so that their ends are at right angles to their origin and destination buildings, have them run alongside them – that way, you’ll be able to attach up to three sorters, which allows you to adjust how quickly things are loaded and unloaded from the belt. 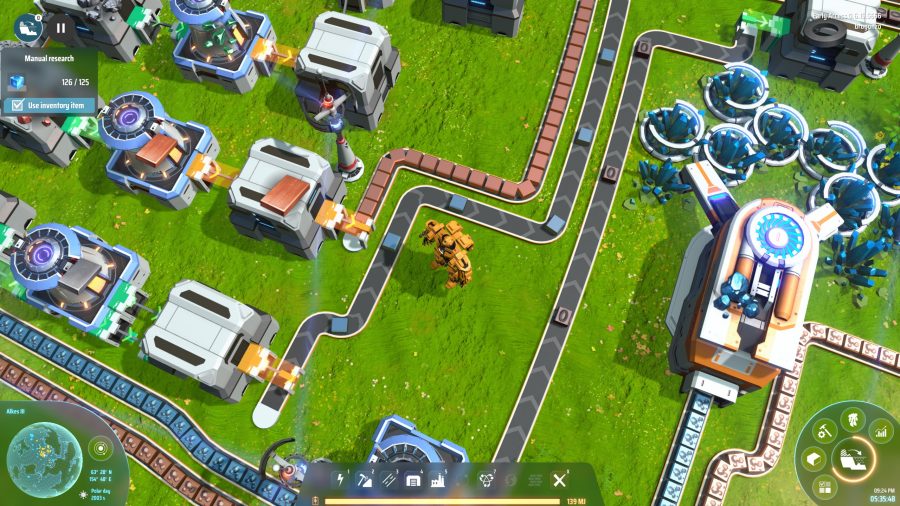 Speaking of sorters, you can double click on your sorters to set a filter on them – this will instruct them to only handle a particular type of object. Doing this allows you to use conveyor belts for more than one kind of product or material – but keep an eye out for pile-ups that back up the line.

Inevitably, you’ll run into situations where you’ll want to move materials across an existing conveyor belt line. You have a couple options here as well: first, you can use the up and down arrow keys to adjust the height of a conveyor belt as you’re building it, and doing this allows you to ‘jump’ one line over another. You can also use a sorter to pull goods across an existing line: when you build a sorter, just click the starting location first, followed by the location where you want it to drop off. You can cross up to two grid squares using sorters, but bear in mind that the further they have to travel, the longer they’ll take to complete a full cycle.

Related: Check out the best building games on PC

Remember that conveyors always run in the direction they’re built – that is, they’ll start at the point where you first click and move toward the point where you click to finish the line. The same goes for sorters – first click is the starting point, second click is where it drops things off. If you mess up placing anything in Dyson Sphere Program, don’t worry: just click the X button on the right-hand side of the construction panel and select the misplaced structures. They’ll immediately be transported to your mech inventory, and you can put them right back up in moments.

When you’ve successfully researched the new conveyor belts and sorters, you’ll be pleased to know that you can upgrade them without the need to rip apart your carefully constructed supply routes. By clicking on the conveyor belt or sorter you wish to upgrade, there is now an upgrade button on the item bar. The only things you’ll need are the extra items required to make the upgraded belt or sorter. 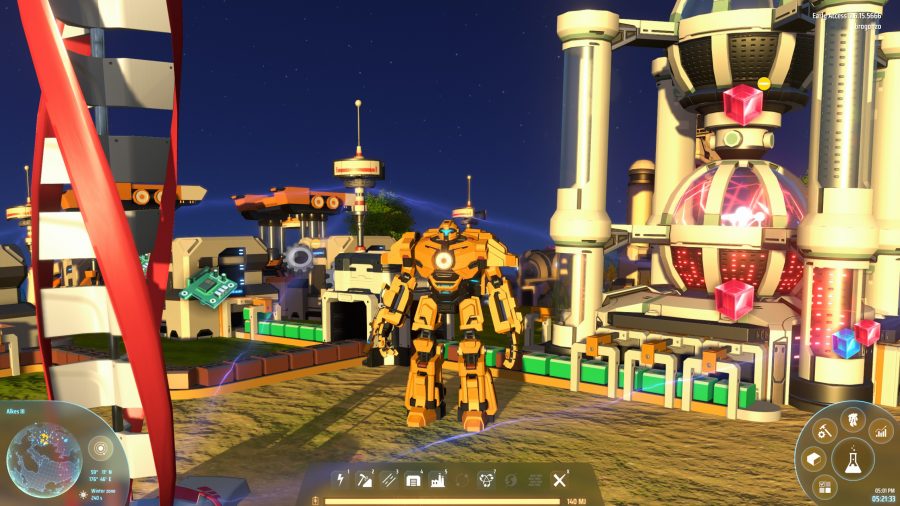 To reach the stars in Dyson Sphere Program, which is literally the whole point of the game, you need to get your science on. Once you can build a Matrix Lab, you’ll be able to start doing research in earnest, and as you might expect, research consumes resources that you have to produce.

In the initial steps of the tech tree, you can unlock new facilities, access new resources, and upgrade your mech using finished goods you produce in your assembly machines and smelting facilities, but eventually you need to produce matrices in the lab.

The first kind you need is the blue Electromagnetic Matrix, which is made from circuit boards and electromagnetic coils – both of which you can make in assembly machines. Set up production lines for each, and have those goods sent to the lab to produce the matrices. Just like with any other facility, you can set up a storage box next to the lab, and have excess matrix stored there – just link up a sorter from the lab to the box, and you’ll have a stash to draw from for your next research project.

Now you’re all set to explore Dyson Sphere Program! More advanced research requires more complex materials and matrices, and you have to work out how to produce those using the tools you’ve learned so far. Some items are only available off-world, such as Dyson Sphere Program titanium, but the same principles apply to just about everything in the game, so don’t be afraid to experiment.

More importantly, bear in mind that reorganising your base is relatively painless – you can dismantle just about anything and pop it right back up in a new location at will. That makes trying out new layouts easy and (mostly) painless, so keep tweaking your setup as you find new ways to optimise your production lines.