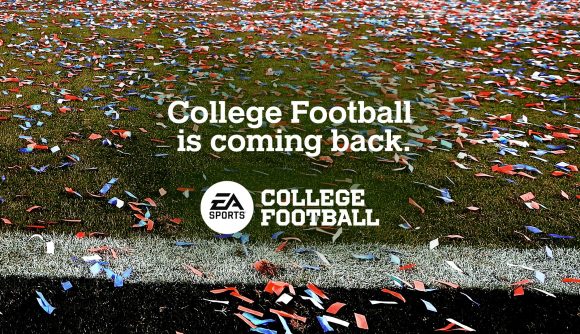 It’s been the better part of a decade since EA’s NCAA Football series was bringing American collegiate football to the world of videogames, in large part due to ongoing controversy over player likeness rights. Now the publisher is taking another swing at the concept with EA Sports College Football, which will feature over 100 teams, but zero player likenesses.

EA Sports College Football has exclusive videogame rights with the Collegiate Licensing Company, which will “include the rights to more than 100 institutions featuring the logos, stadiums, uniforms, gameday traditions, and more,” the publisher says in a press release. “While this college game will not include student-athlete names, images and likenesses, EA Sports is continuing to watch those developments closely.”

Instead of using real people, the game will generate random names, appearances, and attributes for all the players. As EA’s Cam Weber tells The Washington Post, the studio would be interested in picking up proper player likeness rights. “We’re not relying on it. But the game will be designed in a way so that in the future, if there was a way to integrate them, we would do so.”

Don’t expect the new College Football to launch any time soon. EA says the project has just entered development, and says that release info will come as the “project progresses in the years ahead”.

The company doesn’t provide any additional details on what to expect from the title either, so we’ll have to wait and see if we’re getting a reskinned Madden or something more substantial.

Hopefully we’ll get it among our PC games, as well. That wasn’t a given back in the original days of NCAA Football, but recent Maddens have been coming to home computers alongside consoles – though Madden 21 on PC has yet to get the next-gen improvements that console players have seen.