In an effort to promote transparency, EA have announced a new labeling system for third-party content made with their games. From now on, such content will be clearly marked if it is an advert for an EA product, or if EA sponsored access to the featured game.

The announcement comes via the German EA news blog(Google provides a serviceable translation for English speakers).

By contract, EA will require creators to use one of two labels to disclose the influence EA have had on their content. The two categories are Supported by EA and Advertisement.

‘Supported by EA’ means EA has sponsored access to the featured game, perhaps by providing review code, or by hosting a press event and inviting creators, in which case they may also pay travel or other expenses. EA are clear however that, beyond this, they will have had no editorial influence on creators or the content they produce.

Content labeled ‘advertisement’, on the other hand, is content in which EA has had editorial influence. The creator may have been paid or asked to give a positive impression of the game, or the content may have been produced by EA itself. It is, as the label suggests, an advert; a piece of promotional material intended to convince you to buy a product.

By EA’s new rules, content creators will be required to use the hashtags #supportedbyEA or #advertisement to label text and image content on such sites as Twitter, Instagram or Facebook. For videos and streams, creators will have to use either of the watermarks below, or add a clear audio message at the beginning of the video advising viewers that the content is either supported by EA or an EA advert. 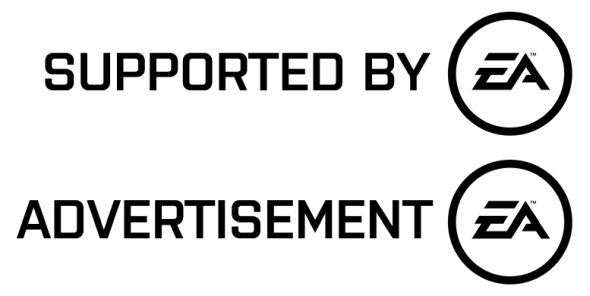 The decision will be welcomed by anyone angry at the blurred lines between voluntary and paid promotional content on sites like YouTube and Twitch, which have caused occasional scandals wherein viewers didn’t know if they could trust a creator’s opinion of a game. Here’s hoping other publishers follow EA’s lead and we see a new code of conduct in supported content.