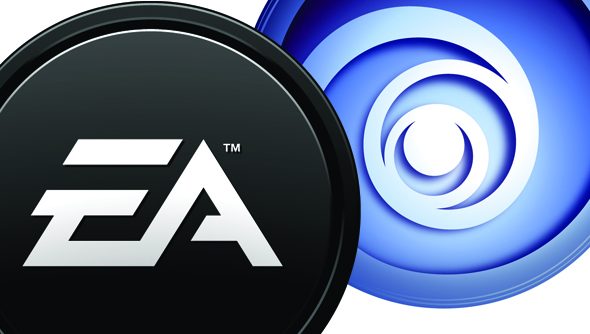 For some reason (perhaps even the same reason) both EA and Ubisoft have recently stepped forwards to re-apologise for their recent treatment of us poor, downtrodden PC gamers. Here’s EA saying they’re rubbish listeners. And here’s Ubisoft vowing to improve. How queer!

Both publishers are enthusiastically re-iterating their commitment to making playing their games on PC something other than a harrowing ordeal. Truthfully, I think they’ve been doing alright lately, with just the occasional monstrous balls-up marring an otherwise clean record of delivering a catalogue of fairly decent games about spies and space missions and tigers and assassins. And as a conglomerate of developers, of course they are undeniably behind some of the best PC games of all time.

But with EA and Ubisoft now simultaneously banging on our PC cases and demanding to be let back into our comforting embrace, to whom do we throw open our arms? We are, after all, only capable of loving one and hating the other. The only way to decide is to figure out once and for all who is the least worst at publishing games on PC. EA or Ubisoft?

We were totally assured that this was the brave new frontier of DRM: a horrific dystopia in which games would lock you out as soon as your internet connection went a bit squiffy. How were EA and Ubisoft to know that you hadn’t become a software pirate in the five seconds since they last checked? Ubisoft ran much farther with the idea however, scoring themselves big points in this category.

Ubisoft’s heroic u-turn immediately stripped their games of their always-online requirement, while EA’s SimCity took a bit longer to come around to the notion that legitimate players might in some way be hampered by these measures. For temporarily eroding basic consumer rights, only half a point per un-DRM’ed game will be awarded here.

Far Cry’s tigers may be the first that spring to mind, but its the long running Tiger Woods PGA Tour games that secure victory for EA in this hard fought category.

Battlefield 4 works now, but it didn’t before. It really didn’t. Oh how it didn’t. If you laid out how much Battlefield 4 didn’t, end to end, it just wouldn’t. It couldn’t even. That’s how much it didn’t.

Assuming Faith from Mirror’s Edge is sort of a spy-cum-courier character, the athletic protagonist saves EA from scoring an embarrassing naught in this legs akimbo round. Sam Fisher’s thigh gap wins it comfortably for Ubisoft all the same.

Ubisoft, please stop doing this. It was endearing for a while how you would promise that this time, super seriously, we’d get Assassin’s Creed at the same time as everybody else, only to announce a delay a week before launch. But it’s just rude now, quite frankly. And EA, you’ve probably done this at least once, to be fair.

Oh Dungeon Keeper, look what they’ve done to you. It’s like seeing your dead grandmother propped up on strings and dancing for pennies. You utter monsters.

Say what you will about Origin as a storefront, its customer services department is a source of endless amusement online. As long as you’re not on the receiving end of it. Ubisoft need to up their game in this regard.

So there you have it, a late turnaround for EA lands them firmly on top of the leaderboard, securing them the well deserved title of “Least Worst Publisher of PC Games In The Subset of Publishers That Includes Only EA and Ubisoft”. Well done.

Whatever irreparable harm they have caused the PC games industry, they have more than made up for in entertaining screenshots of badly trained, minimum wage customer services representatives doing their jobs deplorably. Thank you, EA.