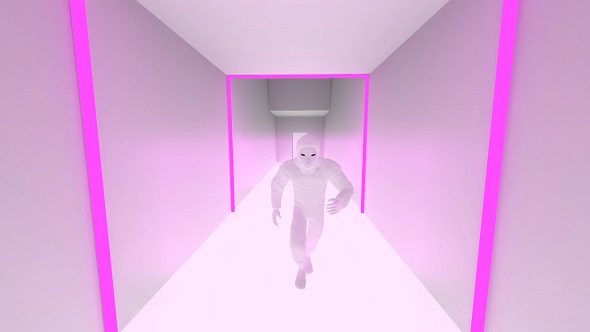 Taking that nightmare of being chased around by a masked assailant and dialing up a notch, the first-person horror puzzler Echoplex is now on Steam Early Access. Locked in a futuristic facility, it’s the player’s job to escape a series of rooms while being pursued by clones of themselves.

For fright fans, take a look at these truly terrifying PC horror games.

Well I say pursued, the clones are just following a path you previously took through the room. The core mechanic of Echoplex is that at certain time intervals, a clone or ‘Echo’ of you will appear in the room. These Echoes follow your exact movements, walking the same path and hitting the same switches as you. While they seem frightening at first, players must soon learn how to exploit these phantoms to continue their progress through the facility.

For example, a player could press a button at one end of the room to briefly unlock a door. They can then walk over to the door, wait for their Echo to press the button again and then pass through into the next room. In the larger levels, you’ll have to negotiate around multiple Echoes, as colliding with one of them spells death. When you have multiple masked figures stalking you through these neon-coloured testing rooms, Echoplex can become quite the terrifying experience.

Echoplex has 15 puzzle levels at present, along with a self-contained story told through FMV “memory fragments” according to the Steam page. While in Steam Early Access, developer Output Games hopes to add more puzzle levels, more story chapters and generally give the game’s graphics, animation and sound a good old polish up.

The developers hope to add some kind of mode which allows players to explore a level without an Echo stalking them straight away, as well as improving some of the puzzle design so the solution is easier to grasp on your first walkthrough. If resources allow, Output Games hope to add a level editor to Echoplex, so you can create your own devious puzzle rooms.