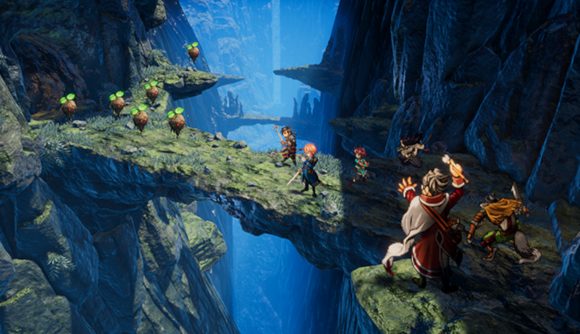 It’s been over a decade since the last Suikoden game hit shelves, but members of the original creative team are now building a spiritual successor. Eiyuden Chronicle: Hundred Heroes was announced last week alongside a promising set of early images, and the game is already rocking Kickstarter.

The Eiyuden Chronicle Kickstarter went live at around 9:00 PDT / 12:00 EDT / 17:00 BST today, July 27, and hit 50% of its funding goal within 40 minutes, as Nibel notes on Twitter. Shortly after the Kickstarter went live, the crowdfunding site itself went down – maybe it’s a coincidence, but I prefer to believe that the sheer power of JRPG fans overwhelmed those servers.

Even with the Kickstarter outage, Eiyuden Chronicle managed to hit its full ¥54,000,000 funding goal – around $500,000 USD – in just over two hours. That’s enough to bring us the base PC version, but further stretch goals include a town-building system and, at $1,000,000 USD, ports to current and next-gen consoles.

Eiyuden Chronicle is tentatively scheduled to launch in October 2022, but that date is very much subject to change as development begins in earnest. Check out the Kickstarter for yourself if you’re looking for more details.

There are plenty of further RPG games to fill your time until Eiyuden Chronicle’s eventual release.