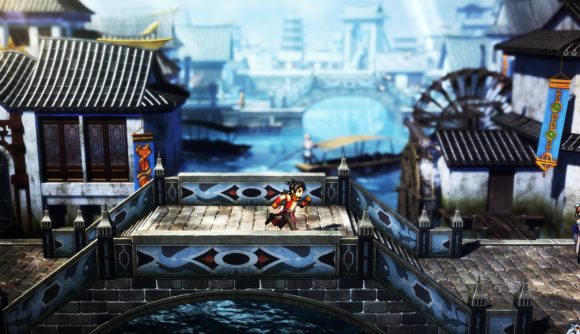 Suikoden is one of the greatest RPG games of the original PlayStation era – and that’s saying something. The series has been dormant for well over a decade, and while Konami has no apparent plans to bring it back, the original developers do – a spiritual successor called Eiyuden Chronicle: Hundred Heroes is on the way, and the early images of the game look absolutely gorgeous.

Eiyuden Chronicle, led by Suikoden creator Yoshitaka Murayama and other series veterans, will feature a six-character party made up of 100 recruitable heroes from around the game’s fantasy world. In other words: yes, this is totally a new Suikoden game. The boss battles will even play out with a dynamic camera that takes new angles to follow the action – though that’s likely going to look a lot more impressive with modern tech.

The game will hit Kickstarter on July 27, with an initial funding goal of $500,000. That’ll cover a PC release, while further stretch goals will open up development on additional console platforms. Development studio Rabbit & Bear was founded earlier this year, so Eiyuden Chronicle is likely only now in the very early stages of production.

The game’s visual target already looks extremely appealing, though, with a blend of 3D backgrounds, 2D pixel art, and fabulous lighting that looks a whole lot like Octopath Traveler.

The devs have provided a host of additional details to Gematsu. I’d expect a long, long wait for Eiyuden Chronicle, but the pedigree and the early looks seem extremely promising.