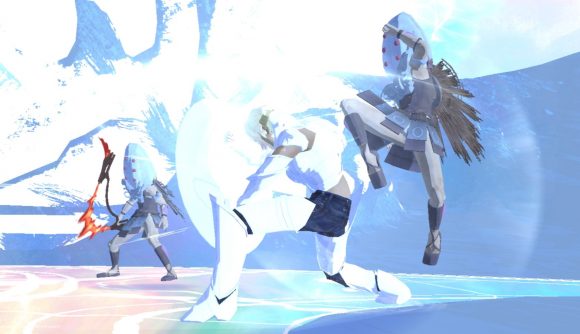 Now here’s a pleasant surprise. El Shaddai: Ascension of the Metatron, the 2011 character action-adventure game that married the spectacle combat of Devil May Cry with a Studio Ghibli-esque visual style, is coming to Steam. The game’s director confirmed that he’s working on the Steam version in a December 7 tweet.

Sawaki Takeyasu, who did character design work on Devil May Cry and Okami, said he is currently working on a Steam version of El Shaddai, and that with the move to PC hardware from PlayStation 3 and Xbox 360, he’s creating a launcher for the game that allows players to pick between English and Japanese audio and subtitles.

El Shaddai is styled a bit like an anime game, but it’s closest to Capcom classics in the Devil May Cry series with its spectacle combat that focuses on flashy combos. As protagonist Enoch, you’re equipped with holy armour that loses components when you’re hit. If you’re damaged without any of your armour left, you’ll have a small window of time to repair it – but if you can’t manage that, you’ll be sent back to a checkpoint.

According to the Wikipedia entry on the game, El Shaddai’s story is loosely based on the apocryphal Book of Enoch, and involves a prophet who must enlist the help of seven angels in order to forestall an apocalyptic flood that will wipe out humanity.

‘Metatron’ is a figure in some mystic texts who is sometimes identified as an angel or heavenly prince; El Shaddai is one of the names for the God of Israel.

While it was made more than a console generation ago, El Shaddai still holds up visually thanks to its stylised animated visuals. We’ll be eager to see how it looks on modern PCs. There’s no release date set yet, and no Steam page – we’re hoping Takeyasu shares more information soon.