When Elden Ring’s open world was revealed it did look a tiny bit formulaic. Bandit camps, crafting mechanics, tileset dungeons and catacombs, and light emergent gameplay in the form of moving caravans. Nothing new here, right? Now it’s out, it’s pretty clear that Elden Ring is something special. The kind of special that has us handing out perfect review scores (you can check out our Elden Ring review here) and endlessly poring over every tiny detail. Everyone is talking about it, almost uncontrollably. There are discussions on how to kill massive knights with names like Godrick, Godfrey, and Godwyn, ceaseless chatter about apocalyptic sorceries and impossibly large swords, and arguments about supposed reptiles that are definitely dogs.

This is, then, a fantastic opportunity to take stock. Open-world game development over the past decade has grown increasingly stale, dead-eyed, and predictable. There are crucial lessons that can be learned from Elden Ring’s success.

If we could only convince other studios to internalise the spirit and intention of Elden Ring, the genre would be refreshed and revitalised. We wouldn’t let out a heavy, involuntary sigh the next time someone on a conference stage proudly proclaims their game world is 8,000 thousand times bigger than Earth, and contains 900 missions. We’d trust again, like we once did, that open worlds are exciting places.

So, here are four important lessons all open-world games can learn from Elden Ring, from enemy scaling to in-game maps. 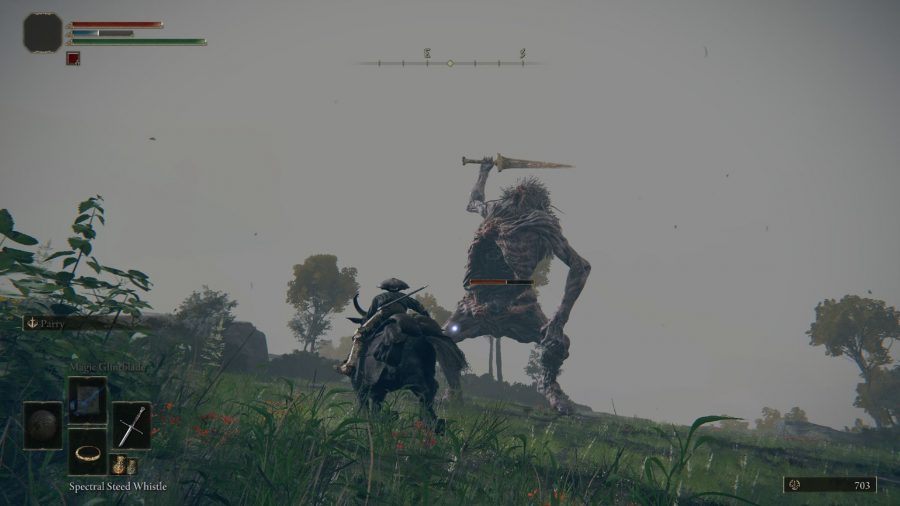 Don’t scale enemies to the player

This is the difference between feeling like you’re exploring a virtual world and stumbling on strange discoveries and walking past a bunch of game assets while an algorithm throws enemies at you. Most open-world games scale the health, damage, or variation of enemies to the player’s XP level so they don’t get mushed to a fine paste for walking down the wrong path. It’s easy to understand why a game designer might do this, and it all comes from a warm, nurturing place. They want you to have fun. They want your level of challenge to increase on a linear curve, while relinquishing control of exactly where you go and what you do. It’s just that we’re probably a bit too well-versed in enemy scaling now.

By contrast, Elden Ring does nothing to sugarcoat the fact you’ve wandered into an area well beyond your current abilities. It’s a bit frustrating to die when this happens, but truthfully it only adds to the allure of that area and its resident enemies. There’s a thrill to feeling like you’ve wandered off somewhere you shouldn’t, and that’s heightened when you feel like you just might get away with it. To be fair, some players do get away with it, typically the ones who’ve finished Dark Souls blindfolded using a Donkey Kong Bongos controller. The rest of us can usually make off with a greatsword or some crafting materials we can’t use yet.

Skyrim’s approach is quite subtle, but by virtue of the fact that we’ve all been playing it for 11 straight years, the veneer has worn thin. Enemies are generated according to the player level, but with a bit of flexibility. So at level ten you might see a different makeup of enemies in one area than at level 21, and the more ubiquitous enemies like human bandits spawn with higher health and damage ranges. Fallout 4 does pretty much the same thing.

Destiny tries to take the training wheels off enemy scaling too, holding firm with the potency of enemies in each area regardless of the player’s level. But it gives you such a clear HUD indication that you’re barely tickling high-level enemies, it’s basically saying, ‘bro, you’re not ready for this yet’. 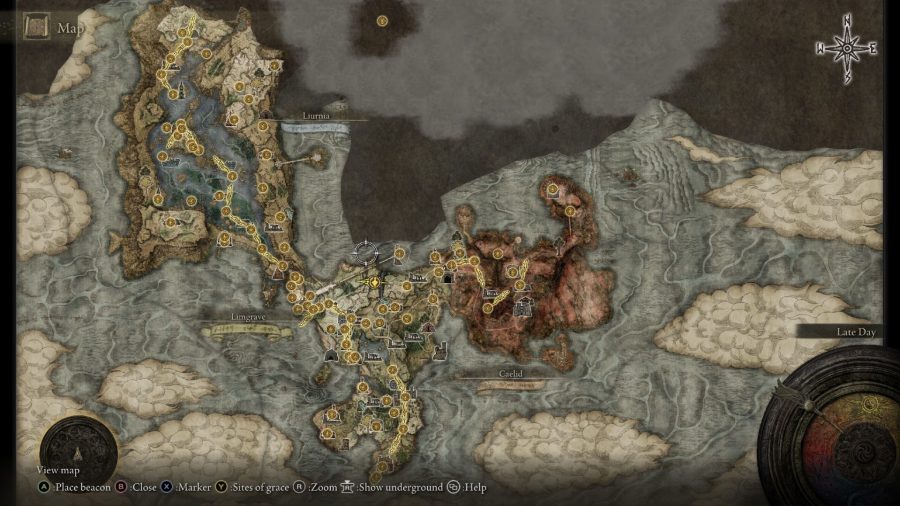 Keep the player’s eye on the environment

And vitally, not the map. The problem of navigating without having to flit back and forth between game world and map screen has become deeper with open worlds that really pushed the square miles envelope, like Assassin’s Creed Odyssey’s impossibly big Mediterranean archipelago. After a certain point, you might as well just fast travel everywhere because you’re no longer engaging with the physical landscape, but instead checking in on it every few seconds to make sure it tallies with the map.

Elden Ring, like Nintendo’s Breath of the Wild (and to a lesser extent The Witcher 3), negates that problem by drawing the player into the next area using eye-catching topographical features. There’s always something on its fantasy horizon to pique your interest, and because FromSoftware’s a bit magical in this way, that something is usually the place the designers intend you to visit next. And if it isn’t, it’s at least a memorable geographical marker you can use to build a map of your own.

Right from the start, you understand that like the giant evil castle in Breath of the Wild, that massive golden tree is probably pretty important and central to your quest. It doesn’t need a quest marker to say it. 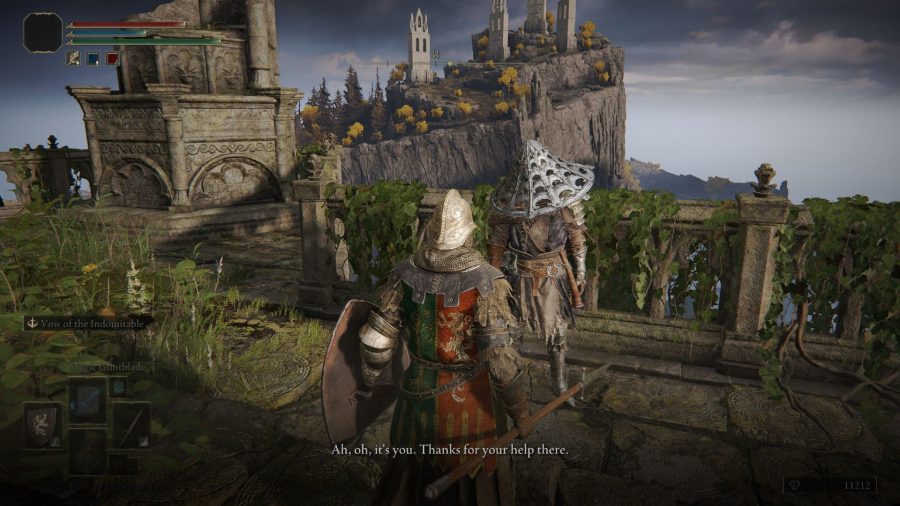 Make things happen in front of the player

Ironically, Far Cry is one of the better advocates of this. And I say ironically because Ubisoft’s well-thumbed Far Cry open-world template is one of the most lambasted and derided in gamingdom. We’re all about three long climbs up a tower away from deleting our Ubisoft Connect accounts forever at this point, but if there’s one thing it does well then it’s creating scenes right in front of the player, so they always feel as if they’ve just stumbled onto something special.

there’s so much hidden away, kept behind a veil of mystery, that you couldn’t possibly see it all in one playthrough

In Far Cry’s case the stakes are usually quite low: a honey badger might kill and eat one of the hundreds of identical guards/pirates/cult members on the map, but they’re still enjoyable to watch and they have a way of escalating in front of you. And you can exacerbate things with some grenades and gunfire, drafting in explosions and fresh vehicles full of goons to fuel the spectacle.

Otherwise, open world environments are usually sterile places. They’re like adventure waiting rooms, somewhere to pace around in until the next curated sequence of events kicks in when you land on a quest marker. And obviously that totally robs the environment of a convincing sense of place. Elden Ring’s approach is, as with all Souls games, to trust the player to a fault, allowing story events with real consequences and implications to play out whether you’re watching or not. And far from frustrating you, it makes you feel that there are things just… happening in this world, all over the place. Like they do in the real world. 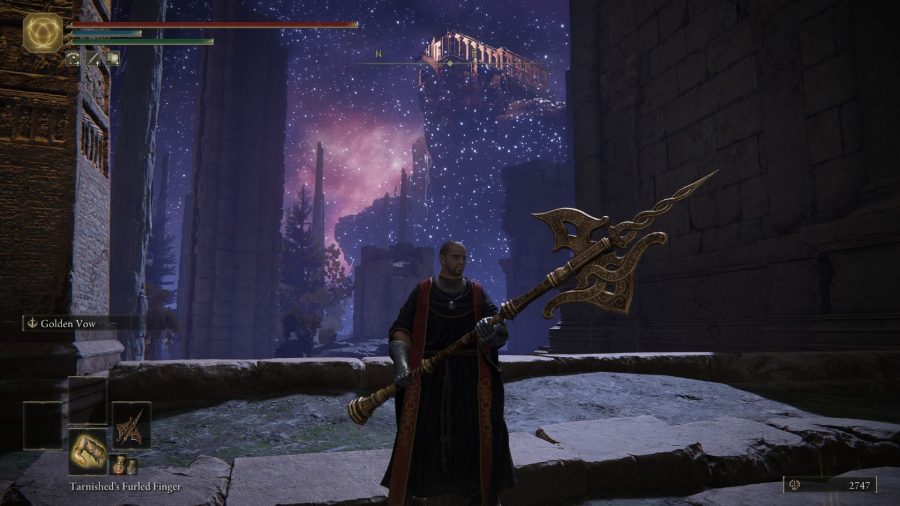 This one is key. By far the most disconcerting aspect of modern open-world games is the realisation that the next 30 to 40 hours mapped out in front of you consist of the same six or seven gameplay loops, repeated and scattered throughout the map with only slight variations to save you from total despair.

The difference between earth-shattering main missions of the primary questline and every other activity on the map is that the former have voice acting and cutscenes. Otherwise, settle in for sneaking into outposts and killing everyone 250 times, collecting some kind of shrub and exploring modular dungeons made up of the bits of dungeons you’ve already explored, but this time in a slightly different order.

This is arguably the bit Elden Ring does better than anything else. Nothing exists in this game world simply to prolong how much time you spend there. On the contrary, the sensation is actually that there’s so much hidden away, kept behind a veil of mystery, that you couldn’t possibly see it all in one playthrough – in fact, you literally can’t. And that’s really what’s so thrilling. FromSoftware’s using a larger space in a different way to any other studio, scattering intrigue everywhere instead of copy-and-paste activities.