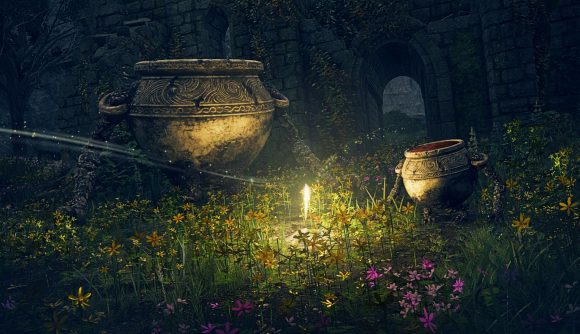 After months of heartbreak – and a few jokey goofs from one particular website – Elden Ring fans finally got a new trailer alongside a release date to boot at the Summer Game Fest. The gameplay reveal features a double-jumping, mountain-defying horse; a big rock lad with a bell; and heaps of baddies getting bopped on the noggin with a sword. It wasn’t any of these things that captured the hearts and minds of the Elden Ring community, though – it was a humble, sentient pot.

Our wee cauldron only appears in the trailer for a couple of seconds, but that’s all the diminutive vessel needed. Two of them show up around the middle of the trailer to shuffle around for a bit before we cut to some other goon getting it in the neck. I don’t know why I would drop everything for this pot – maybe because it has arms, legs, and no face? You may not be able to see, little pot, but that’s okay because I can be your eyes.

Some are calling it Pot Lad, while others have decided on Pot Boy – all are, however, left in awe of the vase. Not long after the trailer aired during the Summer Game Fest, the action-RPG’s subreddit erupted with, well, a lot of feelings. Alongside numerous expressions of affection, we’ve also got offerings of fan art.

Here are some Elden Ring fans being really into Pot Boy.

This is now a pot boy themed subreddit from Eldenring

dropped everything to draw this POT LAD from Eldenring

The pots have had enough of our shit from Eldenring

Stunning. Anyway, we got some other details after the trailer went live. Bandai Namco has confirmed that Elden Ring will have multiplayer and a dynamic weather system. At one point during the trailer, we see the player call upon white phantoms, so maybe we’ll get a summon system? Hopefully we can summon the pot.