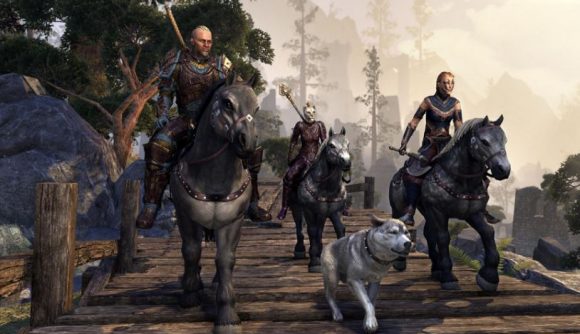 The next chapter of The Elder Scrolls Online has been discovered in a datamine, which shows that it’ll take players to the Khajiit homeland of Elsweyr and feature a year-long war against the dragons.

ElderScrolls.net has details (in Russian – hat tip to ResetEra) on the recent datamine, which also suggests that a new Necromancer class will be coming with the next expansion. Dataminers have looked at text, new icons, and other art found in the client files, and it paints a pretty clear picture of some of the features we’ll be seeing in the next chapter of The Elder Scrolls Online.

As long-time Elder Scrolls fans will no doubt know, Elsweyr is the home of the cat-like Khajiit people, and lies to the south of Cyrodiil on the south-central coast of Tamriel. It’s a harsh, desert-like country with some forested areas toward the south, where plantation owners cultivate Moon Sugar, which is used to make Tamriel’s major recreational drug, Skooma. The native Khajiit are reportedly fairly ambivalent toward necromancy, so it does make sense that the Necromancer class would be introduced in this expansion.

The translation I’ve read makes it a bit difficult to parse out details about the war with the dragons that’s supposed to be part of the Elsweyr expansion, but as best I can tell, the war will last a full real-world year, with important developments occurring each quarter. It sounds as though the emergence of dragons will also spill out into the rest of Tamriel rather than being confined to Elsweyr.

ElderScrolls.net expects an official announcement for the expansion to arrive next week, while the expansion itself should be due out sometime in June. You can read all the details there.