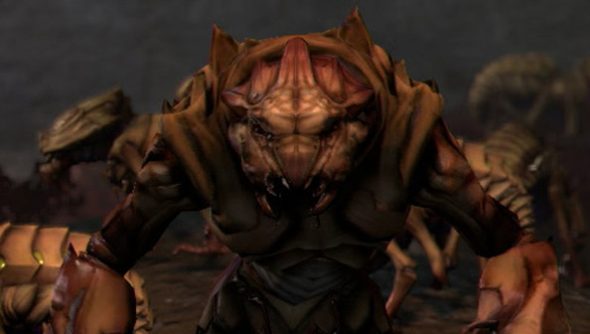 I’m no anthropologist, but it appears to me that the burrowing kwama learns to survive in its uniformly brown habitat by adopting a brown uniform itself. I suppose you might call it the kwama chameleon. Thank you. I feed on your groans.

A second, more useful observation: if you’re paying attention, you’ll spot the robust-looking first-person camera I suspect will be make-or-break for more than a few players come The Elder Scrolls Online’s Spring release.

The insectoid kwama are native to Morrowind, and as such you might recognise them or their burrows, known as “egg mines”, from the game of the same name. They come in three clicking, rustling forms: the scrib, the worker, and the warrior.

Each kwama type has its own abilities, and some combine to notable effect in what the ESO team are calling “synergies”. For instance: when fighting alone, the worker can knock back player characters with a charge, and the warrior will wrench great rocks out of the earth to hurl at enemies. However, if the warrior takes its rock from an area ploughed in the wake of the worker’s charge, a swarm of scrib are hatched and enter the battle.

“These combinations play on the natural cooperation between the different kinds of kwama and help them feel like a cohesive group,” say Zenimax. “A kwama on its own may not be a big threat, but they can be overwhelming when they work together.”

Intriguing. Will you be raiding for eggs in third or first-person?