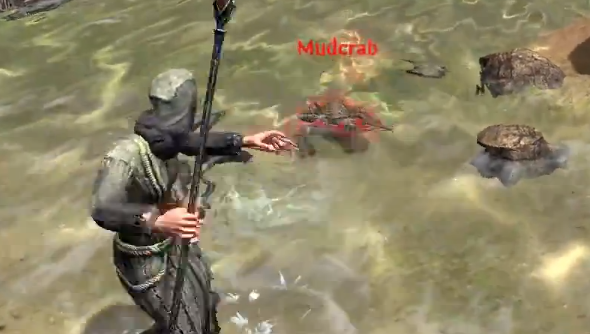 The main takeaway from the 20 minutes of in-game footage below is that the MMO iteration of the Elder Scrolls franchise is going to be mix of the familiar and the unfamiliar, both in terms of tropes of the game and tropes of the MMORPG genre.

We see the return of icons that are now canon for the series, such as the same open eye/closed eye stealth symbol, and the mighty mud crab, too, makes an appearance, but, except for in mods, I’ve not seen my Skyrim characters dance before.

Update: One of Zenimax’s infinite dragons seems to have already got to the video and plucked it from Youtube. Thoughts on the footage and some screenshots remain, though.

As captured footage goes, it’s not the liveliest of affairs. I’d have liked to have seen fewer than the seven minutes of ‘I’m on a boat’ video that we did but we do get a good spread of what to expect as players of the game. There are no hovering quest icons over NPCs but we can set the interface to show friendly NPCs, highlighting those most likely to need our aid; we’ll be managing health, mana, and stamina in our fights against the local fauna; at about 12 minutes in we also see something of how developer Zenimax Online hope to make MMO combat their own, adding in the block technique from the Elder Scrolls games and not leaving dodges and deflections up to unseen dice rolls.

It seems to be a fine halfway point between the single player Elder Scrolls games, and all the interactivity they provide, and the genre-defining MMORPGs, with all the automation of combat and simplicity of quest narrative that they incorporate. Without getting my hands on the game it’s impossible to say how enjoyable it is to play but Tim, who previewed The Elder Scrolls Online last month, loved it. 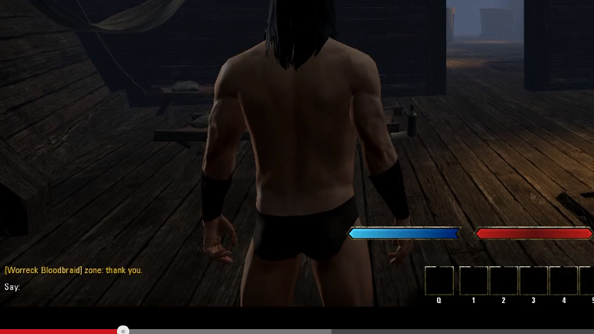