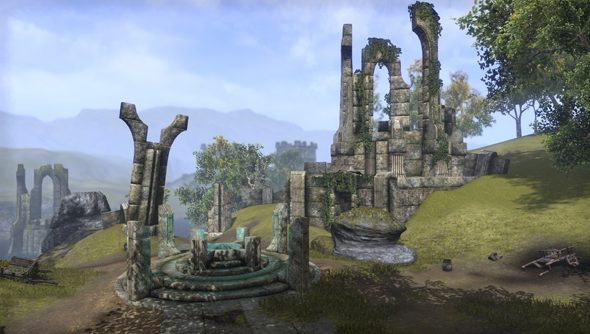 Cyrodiil was not Bethesda’s best open world. Its unrelenting greenness wasn’t nearly so powerful as Fallout 3’s sudden flashes of it, nor as compellingly weird as Morrowind’s massive mushrooms. And where Skyrim offers breathtaking views, 2006’s Oblivion couldn’t help but scupper its own with a dodgy draw distance.

But seven years or so makes the heart fonder and the head forgetful – and we’re quite looking forward to joining The Elder Scrolls Online’s PvP fight across a recognisable warzone. And if Zenimax Online are to be believed, we will recognise it.

“Cyrodiil in our timeline will look very familiar to Oblivion,” wrote Zenimax lead PvP designer Brian Wheeler, “however much more spread out.”

In a long and winding Q&A session with Elitist Jerk forumites, Wheeler confirmed that Zenimax’s version of Cyrodiil was “very, very large” – so much so that it’d take roughly 20 to 30 minutes to cross from North to South on foot.

Given the size of the map, potential players wondered how Zenimax had gone about ensuring that points of interest were scattered throughout. Wheeler answered that besides the major keeps and the outside resources that fuel them, there are “specific choke points” between the territories of the three player Alliances in Cyrodiil. There, we’ll always be able to look for small skirmishes.

The towns dotted throughout Cyrodiil, meanwhile, offer repeatable PvE quests for those looking to take a break from people murder. “Or even better,” suggested Wheeler, “want to look for players taking a break [who] don’t expect to be killed”. PvE objectives will be found in Bruma, Cheydinhal, Chorrol, Cropsford or Vlastarus.

Finally, players asked about the memorable Ayleid ruins that helped define Oblivion’s aesthetic. Wheeler confirmed their return, in Cyrodiil and elsewhere, as dungeons to explore with “stories focused around them”.

“Coming from a purely combat standpoint like the buffs from Oblivion, some Ayleid wells will also offer a temporary bonus to stats once you interact with them,” he said. “These are especially useful in Cyrodiil as you can imagine.”