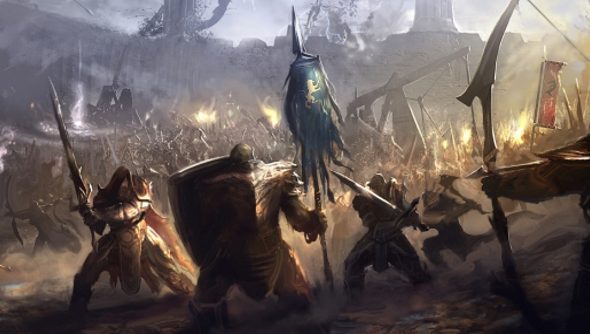 I’ve not really caught the Elder Scrolls Online bug yet, though the opportunity to explore the entire world rather than just one province is a tantalising one. However, the PvP does sound rather nifty, with the whole Emperor mechanic and persistent warfare. Becoming royalty and endless battles are two things I can get down with.

The battlefields of The Elder Scrolls Online are focussed on stalwart keeps dotted around the landscape, and much of the conflict will consist of defending or besieging these significant fortifications. ZeniMax Online discusses the creation of these castles in its latest “Creating ESO” blog post, from concept to placing them in-game.

The design goals for these keeps are features like destructable walls, siege weapons and large battles with lots of players all on the same screen. Even before the art assets were worked on, designers and engineers worked together to build a framework that supported these goals. From there, they started to contemplate layouts.

“We knew we wanted the battles to consist of multiple stages, allowing the attackers and defenders to each have several opportunities to turn the tide of a siege. We had to take combat into account, as well; everything could affect the fun of attacking and defending, from whether or not we’d have character collision (we currently do not) to what abilities players can utilize—knockbacks, gap closers, and area abilities in particular have a strong impact on how the assaults play out. Each of these factors, among others, helped to shape our keeps.”

Initially the plan was to create multi-level keeps with secure inner rooms, but this created bottlenecks on the stairs and tight passageways which didn’t work very well, so the keeps became single floor affairs, but with certain areas in the inner keep where defenders can gain a height advantage. As much as I’m all for elaborate, vertical affairs, I can’t help but recall how messy and tedious PvP could become in the now dead Warhammer Online battle areas, where countless players squeezed into staircases just to die in a bottleneck.

The developers also had to decide how players could actually take a keep; what they’d need to do to finally throw out the defenders and plant their flag atop it. “We considered having a powerful NPC that invaders would need to defeat, but found that this took focus away from fighting enemy players—the assailants would group up and rush to the NPC, sometimes forgoing combat with other players in a mad dash to kill the keep’s lord and gain control. A few iterations later, we came to our current system, where the attackers need to bust into the keep and occupy two flagged locations for a period of time to gain control of it, all the while facing down the defenders trying to drive them out.”

Taking a keep will require a bit of thought, and it won’t just amount to blowing up the walls. Not unless you want to claim a ruin, that is. “You can bust down the front gate or blast through the outer walls, and then even the inner keep’s walls can be destroyed, but you’ll have to consider the amount of damage your alliance does to the structure. If you want, you can blow up all the walls and every door, leaving the defenders exposed, but be warned: when you claim the keep, that damage won’t be instantly repaired. It takes resources to undo the destruction, and it can be costly to completely rebuild.”

Sieges will become multi-stage affairs. Attackers will need to cut off enemy supplies, then assault the walls, break into the keep, fight their way to the capture points and then hold those areas, shifting from attacker to defender. But they’ll still need to clear out the rest of the keep, so some players will have to remain on the offensive.

For all the tasty details on keep warfare, check out the TESO blog.