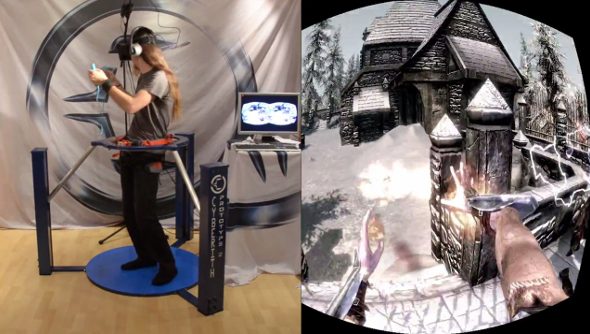 The folk over at Cyberith, developers of the Virtualizer, an “omnidirectional treadmill for virtual reality”, have put together a rather impressive video of Skyrim being played with the Virtualizer along with the Oculus Rift and a Wii Mote.

When the fella – who looks a lot like his character – runs, Dovahkiin runs, when he shoots out his arms, fire spews out of them in-game. Working in tandem, it’s a pretty spectacular way to traverse Skyrim. There’s no sitting down, no keyboards, just a chap running around getting increasingly excited, which is pretty much what VR should be.

It probably goes without saying, but this looks a lot more fun than The Elder Scrolls Online.

Cyberith plans to release more videos in the future, including Battlefield 4, Left 4 Dead 2, Crysis 3 and, bizarrely, Second Life. Frankly, I don’t want to even imagine what one could get up to in Second Life with all this kit.

I’m really going to need to make more space in my room for all of this stuff.