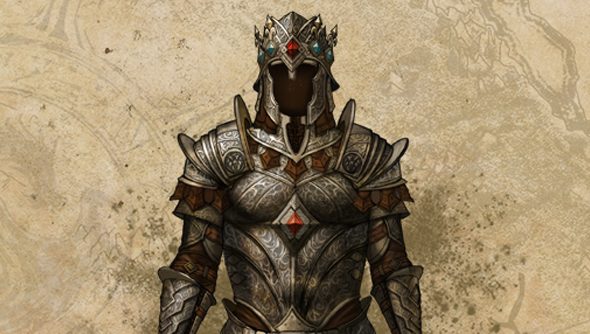 To the new emperor, I say, glorious new clothes. Imagine an armour type that confers incredible stat boosts, but lumbers Cyrodiil’s top player with an embarrassingly naked character model. A contemporary MMO retelling of the classic parable on ostentation.

Ostentation is exactly what Zenimax Online have in mind, though – they want to reward their most machinatious and dedicated PvP players with a metal suit that says both ‘I am your king’ and ‘don’t for a minute think this armour isn’t well used’.

The Elder Scrolls Online’s PvP mode pits three alliances against each other in a fight for green old Cyrodiil, the setting of 2006’s Oblivion. Every once in a while, one alliance will win the fight for their server’s capital – and their top-ranking player will be placed on the throne.

They’ll be presented with this – a ruby-studded, figure-hugging piece that does pomp and practicality all at once. Zenimax say it’s “intricately worked from the strongest materials and valuable beyond measure”.

“The one who sits on the Ruby Throne cuts an imposing figure, driving enemies to flee in fear and inspiring allies to even greater deeds of conquest,” write Zenimax. “When the emperor strides onto the battlefield, everyone takes notice – and few foes will survive to warn their allies.”

Beyond the armour, Emperors gain special abilities that increase their battle prowess. But retaining their grip on power can be tough – their alliance must maintain all of the strongholds they’ve captured or risk themselves being usurped.