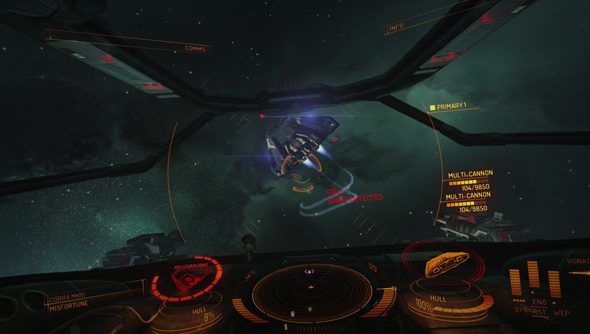 There’s not an awful lot of Elite: Dangerous there at the moment. A set of combat scenarios for Kickstarter backers. An array of admittedly beautiful cockpits, which beep and rattle and set on fire. Many asteroids. That’s okay, because it’s not due out for another three months or so.

But it’s already got convincing VR support, according to an RPS report. A little low-res, a tad pixelated, but quite a bit like being in the most exciting possible version of space.

The Alpha Phase 1.1 update introduced to backers’ version of the game this weekend chucks in all of the stereoscopic 3D features Frontier Developments are testing – Oculus Rift support, side-by-side rendering for 3D TVs, “old school” red/cyan, and Track IR.

Don’t expect immediate fixes for the eye-crossing issues destined to crop up in play – Frontier aren’t back in the office til New Year – but if you’re a backer in possession of magic goggles of one kind or another, you can try Elite in VR right now.

Head-turning is in, which means you can examine the inside of your ship to a hitherto impossible degree. The head is all there is at this stage, though: Frontier have yet to add a full-body avatar. Or targeting crosshairs – because for the time being, they’re not especially useful.

“They were disabled as they didn’t have a position on 3D,” explained David Braben. “We’re experimenting with them at different 3D distances in the world – it feels wrong to have the gun-sight feel like it is inside the cockpit but should be further out into the world – a bit like they do with HUDs in real planes or even in some recent cars like BMWs.

“We will tune it until it feels ‘right’ but this is the beauty of an alpha – we can adjust it over time.”

What’s are you most looking forward to doing in VR space? Bringing down ships, or staring at your feet?