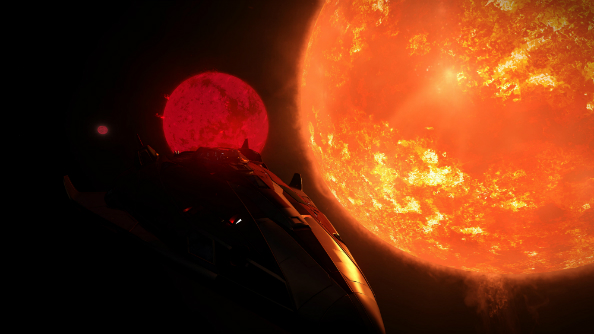 As if modelling the entire galaxy with a level of realism that would keep you awake every night pondering your own insignificance if you gave it too much thought wasn’t enough, Frontier Developments have been busy pouring even more content into Elite: Dangerous. The second planned expansion of the Horizons season is called ‘The Engineers,’ the Cambridge studio revealed to us today. And it’s all about that loot.

Elite: Dangerous is considered kind of a big deal among our best PC space games. The other titles on the list whisper among each other when it draws near, and swoon as it swoops past, thrusters idling.

The Engineers came up in a recent chat I had with Frontier’s CEO David Braben, discussing the studio’s long-term vision for Elite: Dangerous. “That’s the first time that name’s been said, actually,” he told me.

Frontier aren’t quite ready to draw back the curtain completely on The Engineers, though. While we do at least know the name of Horizon’s next big content drop, we don’t know the specifics. For now we’ll have to make our guesses based on the blurb over at the game’s official site:

“Loot and crafting – unlocking a world of customization options and adding new value and meaning to every action.”

If the last expansion, Planetary Landings, is anything to go by, this won’t be a bundle of minor additions. That gave you the opportunity to get out of your spacecraft and motor around in SRVs on the surfaces of 1:1 scale planets in our own Milky Way, adding a) new gameplay possibilities and b) a lot of screenshot opportunities.

There’ll be three further expansions following The Engineers as part of 2016’s Horizons season pass. These will add passengers, in-game avatar customisation, large vessels holding fighters within them, and more before the year’s out.

That release schedule mirror’s 2015’s, a year that saw the game really take shape into the behemoth we know today. There’s no end in sight, either: Frontier have made it clear that they intend to keep adding to Elite Dangerous for the foreseeable future.