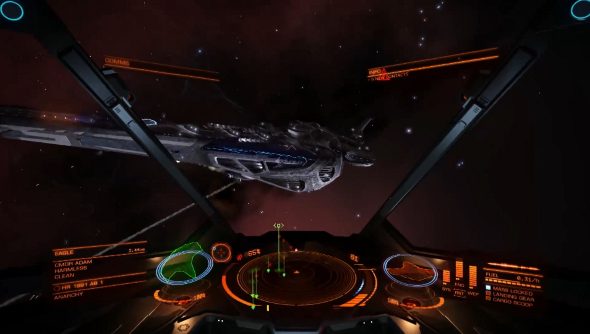 On Saturday, Frontier Developments hosted an Elite: Dangerous premiere, showing off the release version of the space sandbox. If you weren’t able to go there in person, not to worry, as the whole event is now up on YouTube, with interviews with David Braben and the team, and glimpses into the greater universe that surrounds the game.

There were a lot of trailers, some faffing around with the Oculus Rift and more interviews than you could shake a stick at, but the highlight doesn’t come until near the end – at the 54:00 mark of the video.

Until now, capital ships have just been window dressing and props, but an Imperial Majestic Class Interdictor made a surprise appearance as players started to harass Imperial ships in the event’s demonstration. It was quite the entrance, and immediately the players got into trouble – the capital ship is, afterall, a giant gun covered in lots of little guns.

Less flashy and exciting was the introduction of the Elite: Dangerous companion app. The app lets folks stay up to date with development news and videos, as well as in-game news and events. It can also be used by traders to stay plugged into the markets when they aren’t playing the game.

Braben and co announced, last week, that the offline mode mentioned in the Kickstarter pitch would never exist, which lead to a long, long forum thread with players expressing their displeasure. Braben clarified why it couldn’t happen, and apologised for not communicating the problems the team encountered with the community before it made the announcement.