A lot of changes are coming to exploration in Elite Dangerous in the final chapter of its third expansion season, Beyond, and the devs at Frontier ran through them in their latest livestream. If you prefer the written medium, however, here’s a roundup of everything that was discussed.

First up are a slew of upgrades to your scanners, which will remove a lot of the friction in exploring both star systems and planets, as well as give new rewards for doing so. If you find something worth investigating, whether that’s an Earth-like world or a mineral-rich planetary ring, you can use the new detailed surface scanner to map it for a satisfying ‘100% completion’ score, as well as a bonus credit reward.

To help with your mapping and resource prospecting, you can fire probes at stellar bodies, Mass Effect 2-style. These probes are unlimited and will highlight areas likely to contain mineral motherlodes to mine – their trajectory will even be affected by the body’s gravity, so you’ll need to correct your aim.

If you can map a body with a certain number of probes or fewer, you get an efficiency bonus, and if you’re the first to do so, you can sell the data. Bonuses for first discoveries have also been increased significantly, though if you prefer credit to credits, your name will be listed if you’re the first person to discover a stellar body or wholly map a planet.

The full system scanner has also been enhanced, and can now track signals that are not stellar bodies. These include unidentified signal sources, conflict zones, and more, all of which you’ll be able to lock onto and supercruise toward. Systems will now spawn a full set of these signals when you arrive (rather than periodically), and you’ll be able to see a timer indicating how long they’ll remain before disappearing.

To help you see all this, you have a new way of looking at a star system – the Orrery view. This is a 3D representation of the system with wireframe planets and their orbits, and should help you see at a glance how everything around you works.

The Codex is a new compendium of your adventures in the galaxy, as well as its lore and the latest news. It divides the galaxy into 42 regions, each with information on its stellar bodies, geological/biological entities, and civilisations. 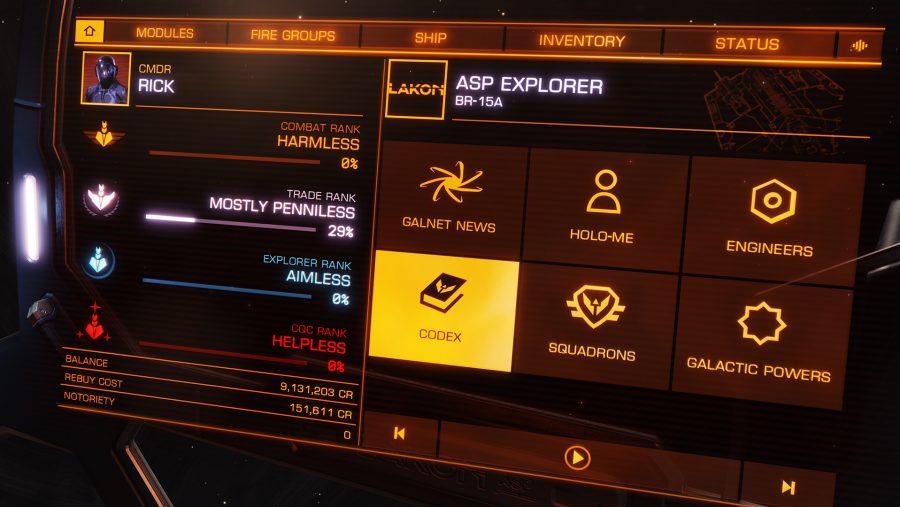 Hunting out these codex entries adds another layer to exploration. Take stellar bodies – these have further subsections for stars, terrestrials and gas giants. In each of these will be a list of types, which can have three states: ‘Rumoured’, ‘Reported’ and ‘Discovered’.

Rumoured means there is a possibility of finding this type of body within that region, while Reported occurs when a Commander finds the rumoured thing, at which point everyone’s codex will be updated to that ‘reported’ state. If you find it and scan it, it will then become Discovered in your codex. There’s also a completely hidden state, more obscure than Rumoured – truly intrepid explorers can be the very first person to find a body and start the first rumours.

Another section of the codex is the knowledgebase – essentially, a lore hub. It’s got text and voice-narrated articles on the history of the Superpowers and other key characters and organisations within the galaxy – including the Thargoids.

In addition to all this, there have been a slew of visual improvements: stars and brighter and deep space is darker, while tweaks to colour grading, volumetric fog effects, god rays, and light diffusion will all add to the atmosphere. Nebulous clouds are officially cloudier and more nebulous. 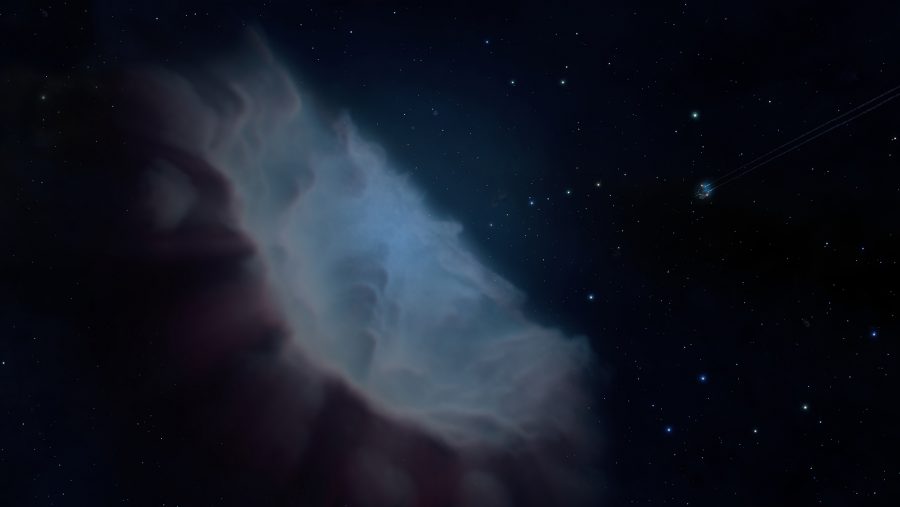 The new scanning tools are also supported by appropriate new visual effects, including a night-vision pulse to help you navigate the dark sides of planets. Finally, a streamlined cockpit layout and interface should add to your quality of life while at the helm.

You can read more on all the above in Frontier’s roundup, or watch it in the VOD of the original livestream. If you’d like some hands-on impressions about how it changes the feel of the game, Jeremy’s got you, and he’s brought whale song.

In other news, another big change in Beyond – Chapter Four is scenario missions, which will add a little more direction to one of the game’s present encounter types while retaining their emergent nature. Again, Jeremy’s been playing these and chatting with the devs, so check out his Elite Dangerous scenario mission impressions.