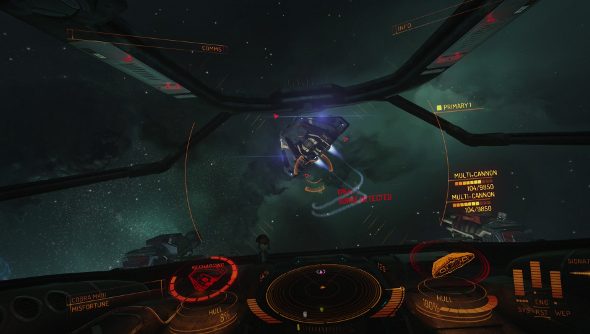 News that the planned offline single-player mode for Elite: Dangerous had been canned led to the typical forum mix of outrage, demands and simple requests for clarification. To clear things up, David Braben went into more detail in regards to what he describes as a difficult decision, in an interview with Eurogamer, while admitting that things could have been handled better.

“Back during the Kickstarter, we were clear about the vision, to make a phenomenal new sequel to Elite in an online world, which we believe we are about to deliver,” explained Braben. “At the time we believed we could also offer a good single-player experience, and base an acceptable offline-only experience off that. As development has progressed, it has become clear that this last assumption is not the case.”

Some thought that killing off offline single-player also meant the death of the story mode entirely, but that’s not the case, it will just be always online.

“Any offline experience would be fundamentally empty,” he continued. “We could write a separate mission system to allow a limited series of fixed missions, but that would still not be a compelling game, and is only the first step in the mountain of work required.”

Braben also touched on concerns that players, potential and otherwise, have about their internet connections, and how having a spotty connection or living in an area with poor service might stop them from being able to play.

“The existing single-player game does not require a fast internet connection, and is not time critical in the same way as the multi-player,” he said.

“I have played single-player on a tethered connection on a train and various other places too, and we will continue to optimise to make the game as robust for ‘spotty’ connections as we can.”

He did acknowledge that telling the community that the feature had been killed off instead of informing them of the studio’s struggles with implementing it was the wrong move.

“In retrospect we should have shared the fact that we were struggling with this aspect with the community, but we were still trying to find a solution. As features were implemented, for the best results we chose to prioritise delivery of the online single and multiplayer experiences, with a view to providing the offline version later in development. We had to make a decision for the good of the game, and that is what we did.

“We have developed a multiplayer game with an unfolding story involving the players, and groups collaborating with specific objectives and taking account of all players’ behaviour. This is what the game is about. Without this it would not be the rich gaming experience that we will deliver, and would be a great disappointment to all players.”