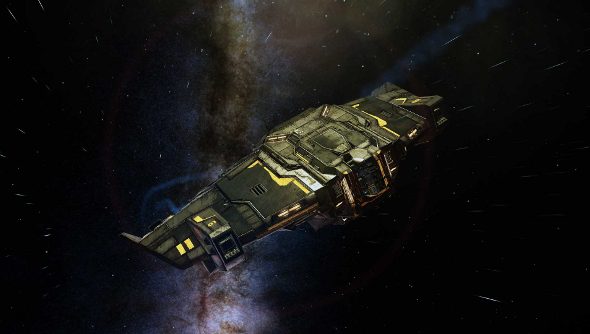 Elite Dangerous 1.2, the Wings update, is fast approaching beta, so Frontier is teasing more of what it will bring to the gargantuan space sandbox, from co-op features to selfies. Both are obviously equally important.

It was the lack of cooperation that made me bounce off Elite so quickly. I was so eager to play, but when it became clear that teaming up with chums, or strangers, was tedious and not really supported by the game, I suddenly became a lot less enamoured with what is, ostensibly, a space MMO without parties.

With this about to change, I’m polishing my flight stick in preparation.

“Player wings exist to enable cooperative game play. One of the neat features wings use to support this notion is the wing beacon. This nifty little device allows you to send a signal from normal space into the system’s super cruise environment.

“Your wing will be able to see the signal – regardless of distance – as long as they are in super cruise in the system; they can use it just like a wake and drop down to your location.

“The wing beacon also leaves the door open for future updates to trigger game events from it, such as distress calls to nearby Commanders and AI ships for example. But right now it makes all the difference when you drop into your wing’s system; with a simple flick of a switch, your team members will be able to instantly lead you to their position.”

As well as being able to team up, it will be easier for pilots to have a natter thanks to the comms overhaul.

“The most obvious change is the ability to transmit open broadcasts. Such text messages will now be received by all ships nearby. Of course, you can toggle your ship’s ability to receive such broadcasts at will.

“We’ve also popped in some text line syntax, allowing you to /T talk directly to the ship you’ve targeted, /R respond to the ship that last talked directly to you, as a well as /W talk to your wing. When you join a wing, you will by default send communications to them, but you can quickly toggle this option when you type your message.”

But what about those selfies? The Wings update will allow players to get control of an unlocked debug camera, which has nothing to do with gameplay, but will allow you to look around the exterior of your ship and take lots of lovely screenshots.

Although 1.2’s beta release isn’t even out yet, Brooks says that we can expect information on 1.3 “soon”.