Update August 18, 2016: In a live stream from Gamescom, Frontier have shown off patch 2.2 and given it an October release window.

The official unveiling of the Elite Dangerous patch 2.2 changes has begun on YouTube.

Here’s the archive of the stream, with the chat starting about 27 minutes in:

They’re doing a couple of streams a day on that channel, spreading out the details across the next few days. They’ve got giveaways, pre-recorded interviews and footage of the new stuff as well. Plus, there was this flashed up for a few frames mid-stream: 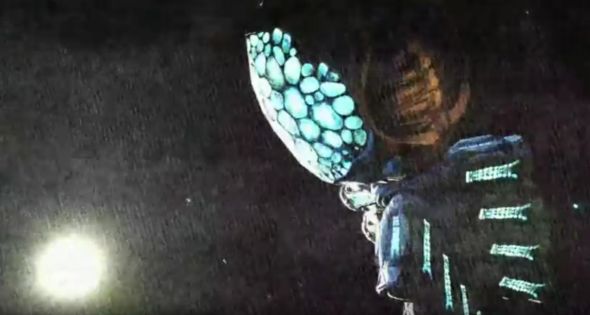 Original story August 17, 2016:Frontier showed off patch 2.2 today in a presentation at Gamescom. There’s a lot of stuff on the way, from being able to fly two spaceships at once to a first official reveal of the game’s alien antagonists.

Let’s start with those aliens, shall we? In the presentation, we saw what looked like a massive, green Cylon Basestar, floating about near the wreckage of a batch of human ships it had just taken out. It was barely a glimpse, a tease for what will be a full reveal this coming Sunday on a livestream.

They’re also introducing a sort of drone system – ships that can be unleashed from your bays to protect a larger vessel. You’ll be able to control them directly if you choose, while an AI temporarily takes over your main ship, switching freely. The smaller vessels are cheap enough that you won’t mind if they get blown up, and optimised for close-quarters combat.

This lets the team at Frontier make non-combat vessels that aren’t necessarily defenseless. There’s going to be a luxury liner, for example, which is designed to carry individuals from one side of space to another. Using the tech that powers drones, you can partner with a fighter to protect your passengers from whatever evil (or well-deserved bounty) they’re escaping, or let the AI take care of any passing pirates for you.

Lastly, there’s been an overhaul to space station interiors, making them much prettier. Not everyone gets this privilege – your favourite backwater isn’t going to be getting an upgrade, but the richer sectors will.

We’ll have more news from the Elite team very soon. Here’s the promo for their livestream: