“There’s nothing out there. Not for a long way anyway. Ahead is nothing but blackness. As I transmit these words I believe I am the furthest any human has ever traveled from Sol.”

CMDR Persera is currently drifting in the inky-black void beyond the edge of the Elite Dangerous galaxy, around 11 light years past the most distant star and around 65,650 light years from our Solar System. And it was all in an attempt to drop off some mugs.

Elite Dangerous’ players have been studying the Thargoids, here’s what they’ve found.

“Far Out Mugs – Send your mug to the Beyond!” said the advert in the Hutton Orbital space station. “Send a personalized Hutton Mug out to the furthest reaches of human explored space. This is an opportunity unlike any other… Pilot Wanted – Think you have what it takes to brave the beyond? Contact The Hutton Orbital Tourism Bureau.”

The Hutton Mug is an infamous rare commodity in Elite Dangerous. Only available at Hutton Orbital, a space station that is infamous for orbiting at a huge distance (0.22 light years) from its parent star, the mugs are apparently “made from the salvaged frame shift drive plates of ships that ran out of fuel before reaching the station”. 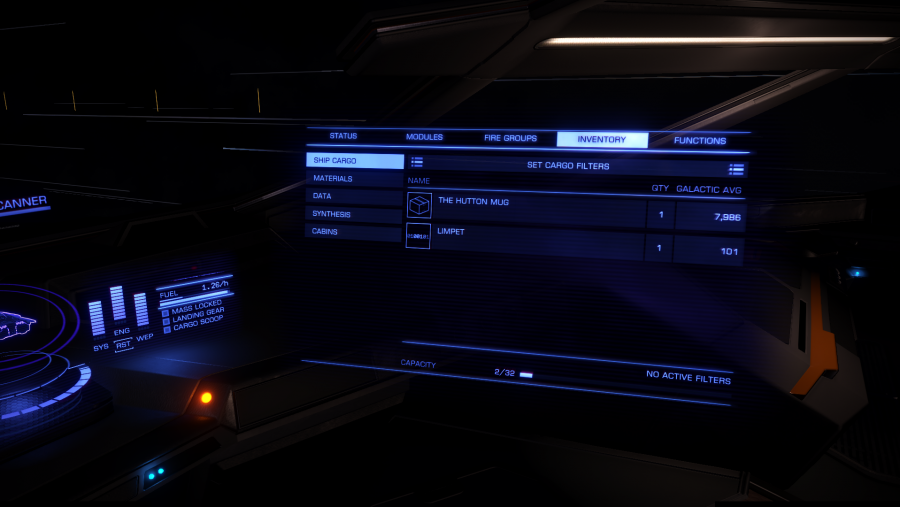 The plan was simple – take a batch of personalized Hutton Mugs, emblazoned with images and messages from various Commanders, and drop them off beyond Beagle Point, one of the most remote star systems in the galaxy. It was a foolhardy, logistically difficult and potentially dangerous mission, with the sole intention of depositing human-made objects in the depths of intergalactic space for the sheer hell of it. Essentially, it was space littering. But CMDR Persera was excited at the prospect of travelling further than anyone had ever gone before in the world of Elite Dangerous – she signed up straight away.

The first attempt didn’t go well. After already having to double back to get more fuel, CMDR Persera ran into pirates and lost her ship along with her entire cargo of Hutton Mugs. Luckily, on her return to Hutton Orbital, she found that there were back-ups of all the messages, and another batch of personalized Hutton Mugs was made ready. So after buying a new ship and stripping back all the systems to maximise fuel economy, she set out again. 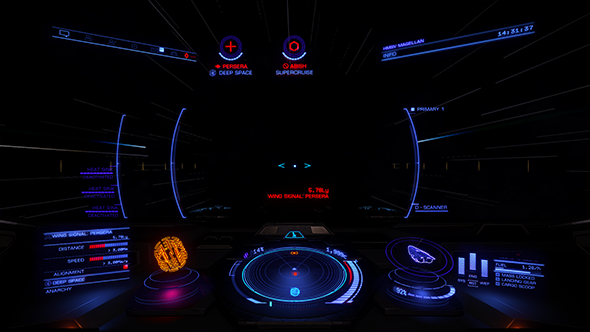 The route out to Beagle Point has been fairly well explored, and CMDR Persera had little problem performing hyperspace jumps from one neutron star to another, scooping up hydrogen fuel from each star as she went. But soon she was past Beagle Point, and there was just one star between her and the empty void – Semotus Beacon. Past this star, she would no longer be able to perform hyperspace jumps, which require a star to lock on to. Instead, she’d have to rely on ‘supercruising’ – essentially, driving in manual.

After 21 hours of supercruising, she was further out than anyone had ever been before. But she decided to keep going. She worked out that she could carry on for another day and still have enough fuel to make a jump back to Semotus Beacon.

But she was wrong. After 48 hours, her tank was running on empty, and she prepared to drop off the mugs and turn around. But her calculations were off – there wasn’t enough juice to make the hyperspace leap. She was stuck in the middle of the void, with little option but to self-destruct her ship – and reset her progress.

“If anyone can save you, it’s the Fuel Rats.” – CMDR Alec Turner

Yet there was one glimmer of hope: The Fuel Rats. This group of thousands of Elite veterans operates as a sort of free space emergency service – any commander who finds themselves stranded without fuel can request a rescue from the Rats, who will often go to great lengths to reach them. The Rats said they were willing to help – but this would be the toughest mission they’d ever faced.

“There was a great deal of planning by a number of the Fuel Rats Mischief [head council] to ensure that we were properly equipped and fuelled to complete the rescue successfully and safely,” says CMDR Highwaywarrior, one of a team of three Rats who signed up to mount the rescue. But even getting anywhere near CMDR Persera’s location will be a challenge. 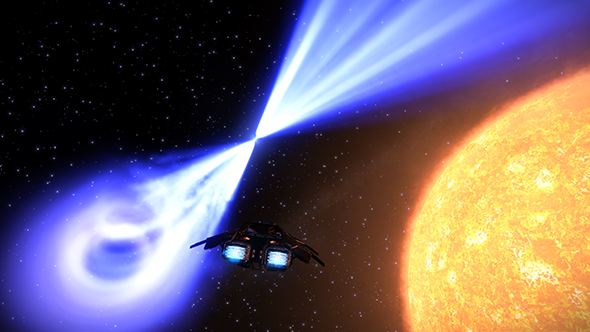 “I was five thousand light years the wrong side of Colonia when this call came in,” says CMDR Highwaywarrior. Colonia is 22,000 light years from human space, and one of the most remote systems with a space station. “In total it took me 20 hours of solid flying time to get to her system. We are currently in day three of this rescue mission and we’ll probably be breaking into the start of day five by the time the rescue is completed. We will have been flying solidly for that time.”

Two other Fuel Rats are joining CMDR Highwaywarrior for what’s been dubbed ‘Operation Beyond the Void’: CMDR TheUnkn0wn1 and CMDR ABish. “CMDR TheUnkn0wn1 had to do a refit at Colonia to remove some modules and equip additional fuel tanks specifically for this mission,” says CMDR Highwaywarrior. Between them, they reckon they have enough additional fuel to get everyone back to the Beacon safely. “We will arrive simultaneously at CMDR Persera’s location and as a team we will provide her with the fuel she needs to make a jump to the nearest scoopable star, and then ensure that each Fuel Rat has enough fuel to do the same. In the event that an unforeseen problem arises we are prepared that one of us may not make the return journey – a fact of life as a Fuel Rat.”

But one miscalculation could mean that there will be four pilots stranded in deep space, rather than just one. And all for the sake of some souvenir mugs.

Home in time for Christmas

“At the moment we have spent 29 hours in supercruise and are not yet at the halfway point to her,” says CMDR Highwaywarrior. “When we arrived in her system she was 11 light years from the main star. We are now 5.78 light years from her position. The actual rescue itself will have to be coordinated nearer the time, as there are three different time zones involved between the Fuel Rats and CMDR Persera! I will keep posting updates on this on my Twitter feed but the reality is that the rendezvous will take place very late on Christmas Eve I think.”

In the meantime, CMDR Persera is having to keep logged out of the game as much as possible to preserve her ship’s dwindling power – it it runs out of juice completely, the life support systems will shut down. But she has been logging on every couple of hours to broadcast a beacon to the incoming rescue ships – the only way that The Fuel Rats will be able to find her in the void.

CMDR TheUnkn0wn1 is live streaming the rescue attempt on Twitch if you want to keep up with the action. Admittedly, the ‘action’ is mostly just black nothing at the moment – but come Christmas Eve, there will (hopefully) be one very relieved space explorer.

CMDR Persera made it back! Late on 23 December, earlier than forecast, CMDR Highwaywarrior, CMDR TheUnkn0wn1 and CMDR ABish made it to her location. More than 2,000 people watched the rescue live on Twitch.

CMDR Persera’s ship was moving erratically when they found her. The problem turned out to be that some of the systems she’d disengaged for the flight weren’t functioning properly, and it took a bit of rejigging to get her ship ready for the jump back home. Eventually, CMDR Highwaywarrior confirmed all was well:

“Final Update. at 21:42(UTC) 23 December 3303 I can confirm that the Fuel Rats refuelled Cmdr Persera, 65,659ly from Sol before she then sent a canister of Hutton Mugs into the void. She’s heading homeward.”

CMDR Persera posted a message of thanks on the Frontier message boards:

“Well, that was even more intense than expected.

Right now just here to say thanks to everyone who helped make this rescue possible, especially CMDRs theUnkn0wn1, Highwaywarrior and ABish and the rest of the Mischief.

And everyone thanks to everyone here and in the Elite community for your support.” 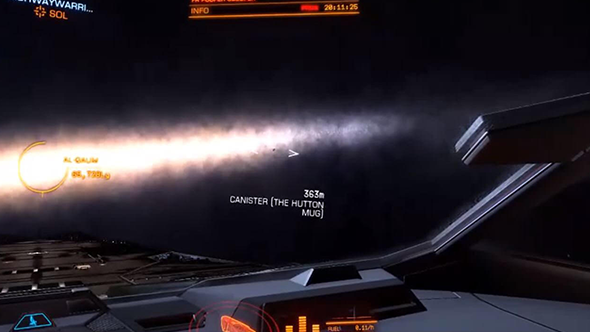 Thank god she remembered to drop off the mugs. She has also written a conclusion to her story of a voyage into The Void Beyond on the Frontier forums. Congratulations to the Fuel Rats on their most epic rescue ever!