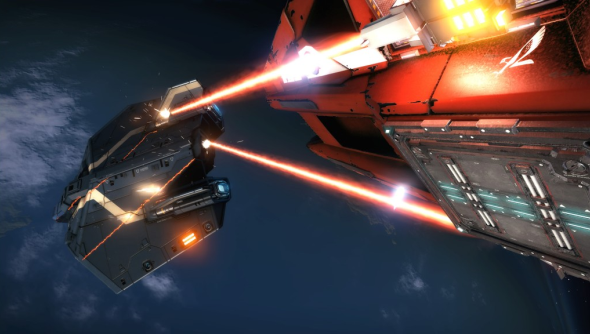 Frontier is currently dealing with a rather unique case of the heebie jeebies – players in their galactic space sim, Elite: Dangerous, are being the target of spooky ghost ships. Reports have been flooding in that when in supercruise, commanders would be interdicted – forcibly pulling them out – only for the interdicting vessel to never appear.

Sounds like they need to call in the professionals.

Frontier lead designer Sandro Sammarco took to the games forums to discuss the pesky bug, among other things. “Interdiction ending with no other vessels present – this sounds very much like a bug, so please ticket.” explained Sammarco. “In general, if an interdiction completes (either because of submission or the interdictor winning) then both ships should be pushed into the same space. I can’t really think of any circumstance where this should not be the case.”

On the topic of interdictions, Frontier are planning to make pilots who submit a little more vulnerable, which right now feels a little redundant since they can escape within a mere five seconds. “Solution one is to allow the interdictor device to have some sort of FSD delaying attack in normal space, that is temporarily disabled when the device is used for a successful interdiction.” Sammarco explained. “Solution two would be to remove submission and instead update the AI to be able to demand Commanders to drop of their own accord so that the authority ships could drop out onto them and scan.”

In another topic, Frontier plan on making murdering other pilots a little more “serious” business. “Firstly, we are looking to add in a future update a change that will cause any bounty claimed to become a special, non-expiring fine for the perpetrator.” stated Sammarco. “The idea is that when you commit a crime you are expected to pay at some point. Currently some game play flow options remove the bounty completing when you are killed, which is not what we want.

“It’s also worth noting that a bounty is not simply a fine to pay (otherwise it would be called a fine). It is also a green light for you to be attacked. In fact, this is undoubtedly the more serious part of the punishment. We are considering bounty adjustments based on some difference metric between Commanders (for example, Elite Commanders getting slapped with a bigger bounty when attacking lower rated pilots, or perhaps based on ship strength).

Along with nerfing chaff, dealing with players “combat logging” and more player interactions for those who aren’t a fan of the PVP lifestyle, Frontier have even more changes in the works by the time their first big update rolls around.