Space miners are in the boring business. That’s the old joke – while shooting holes in asteroids may be profitable, it’s rarely much fun. Designers can only build so many mechanics, and in too many space games mining has been relegated to a simple diversion, with combat getting the majority of the attention. In Eve Online, mining is often perceived as the drudge work that keeps economies running while others engage in player wars and corporate espionage.

Yet, historically, mining has been anything but boring. Real-life colliers have braved the risks of suffocation, roof collapses, gas poisoning, and coal dust explosions – the latter of which have, more than once, swallowed entire pits and everyone in them. Even now, mining is an extraordinarily dangerous profession – the kind undertaken by those with no other option. But outside the lore of the Dishonored series, which often tackles social inequality and exploited workers, it’s one that hasn’t been represented in games with any real sense of peril or gravity.

It’s testament to the success of Elite Dangerous that, nearly four years after release, developer Frontier has dedicated the time and resources to do mining right. There’s no reason to believe the work would get any less terrifying in space, where the embrace of the vacuum is just one cracked cockpit away.

In fact, a sense of jeopardy has been the guiding principle of Frontier’s new mining experience. The results are evocative, both of the Michael Bay melodrama of Armageddon, and Elite’s larger goal – the simulation of things that don’t yet exist. If space mining was a real job, you’d expect it to go something like this. 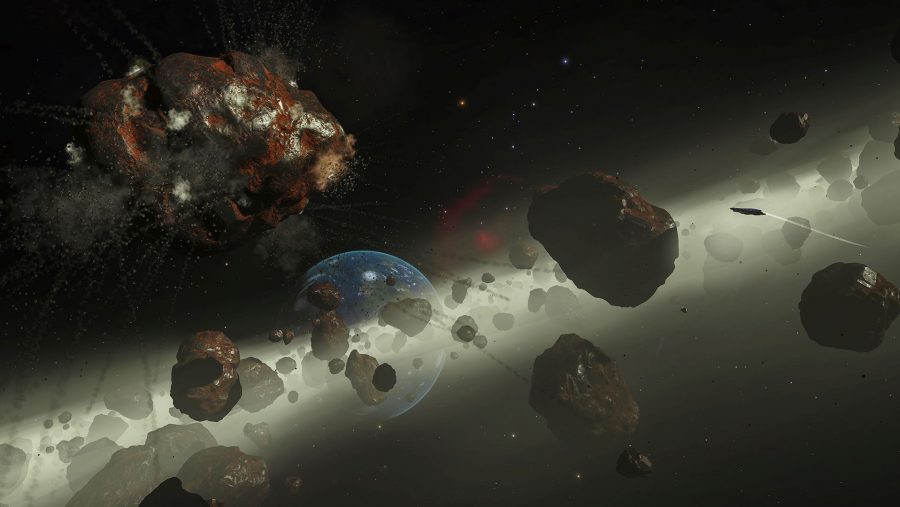 Asteroids cast shadow through the freezing cold fog of a planetary ring system – a lovely new lighting effect courtesy of Elite’s incoming Chapter Four update. Executive producer Adam Woods is about to hit the mother lode, quite literally, with a barrage of drills, missiles, and explosive charges.

“We’re not removing the mining laser,” Woods tells us. “Lots of people want to use it, just as a light entry into mining. That’s absolutely fine. But there are now three new ways to extract resources.”

If space mining was a real job, you’d expect it to go a lot like this

One of these is the disperser missile, mounted with a drill that can carry it right through an asteroid exterior. It’s a careful process that requires Woods to keep an eye on the density of the rock – since that governs the speed of the drill. Drill too far and he could break down the very materials he’s after; drill too cautiously and he could lose the lode that way too, destroying its integrity over the course of several failed attempts. This time, Woods detonates the missile at just the right moment, allowing him to loosen a chunk of the material buried inside. It’s “just a little bit of game,” as game director Laurence Oldham puts it, enough to make mining newly engaging.

Sometimes, however, disperser missiles aren’t powerful enough. For the next asteroid, Woods plumps for the seismic charge, a device as earth shattering as it sounds. He targets the fissures that represent weak spots – places where explosives can prise the gigantic rock apart like fiery fingers.
Each fissure has a strength rating, and the explosives Woods sinks into the rock need to match them. As with the missile, there’s a balance to strike – if he undercooks the charges the asteroid won’t break apart, but if he overcooks them the contents will be damaged. To make matters more tense, a detonation timer begins the moment Woods fires the first charge. In the moments that follow, he plants further charges across the asteroid’s surface, delicately pushing the explosive yield towards its sweet spot. 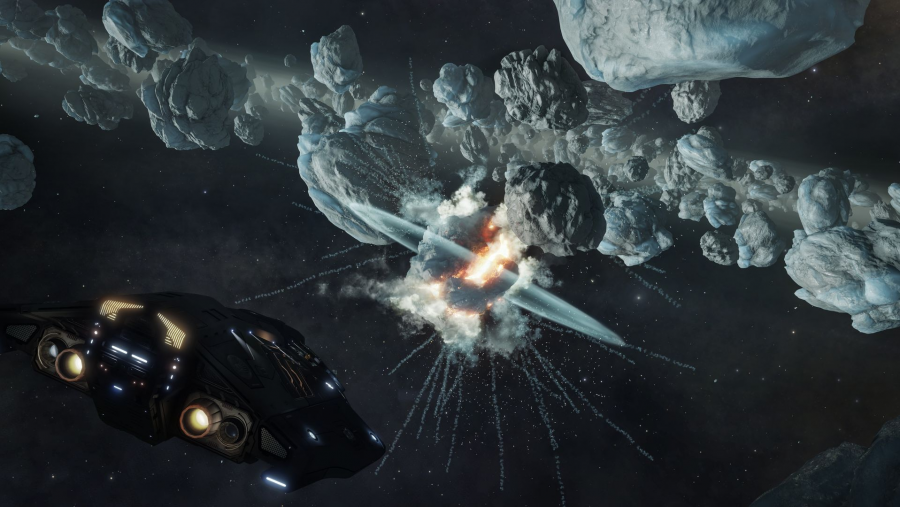 “Skilled players can look at which fissures have got charges in them and do the slightly scary thing of choosing to detonate now, because they’re confident they’re ready,” Woods says. “Or, if they’ve overcooked it, they could disarm one charge and try again.”

In this case, Woods lets the timer play out. The enormous asteroid explodes with a deep, resonant boom – the kind you hear when you’re watching a quiet film in a screen next to a blockbuster. Now he can fly right inside – carefully, since massive chunks of rock have been propelled outward, scraping against his ship’s bodywork. There’s a crackling noise as Woods reaches the heart of the asteroid and the vessel starts to freeze up in the extreme cold. He doesn’t have long.

The surface deposit is visible now, clinging to a central chunk of rock. Woods fires the new abrasion blaster – once, twice, three times before it connects with its target, dislodging the deposit with a satisfying /crunch/. It drifts out into space, where he scoops it up and flies off into the ring’s strange rays of darkness.

“The idea here is that the the skill, the jeopardy, and the time put into these new ways to extract resources will pay out somewhere in the region of what’s expected,” Woods says. “With the motherlode, there is a certain amount of danger to it. You have to figure out how close you can get to this thing before it blows, and it’s pretty terrifying and awe inspiring when it does.”