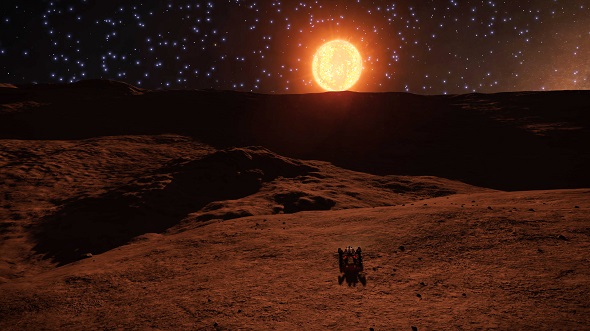 Sticks’ journey carved a route across plains, over the lips of craters, down through the bowls – and up out again, naturally – and into valleys permanently trapped in pitch-black shadow. He documented the entire journey in a thread on the Elite Dangerous forums.

Sticks isn’t the only one – there is a growing club of players circumnavigating planets. The question is: why?

Just getting started? Here’s a beginner’s guide to Elite Dangerous.

“What really inspired my circumnavigation was what happened to Cmdr Tannik Seldon during the ’Aquarian Job’ race,” Commander Alec Turner, founder of The Planetary Circumnavigation Club, tells me. The race included an SRV driving stage and there was a bonus for completing the race with just 1% hull left. “Tannik had smashed his ship up pretty bad and then gone on to drive the SRV stage. When he recalled his ship it blew up on landing. Rather than just self destruct the SRV and start again Tannik decided he’d drive to the nearest planetary base, buy a new ship and complete the course from there.”

Strong plan, but the nearest base was on the other side of the planet – “it took him most of the week,” Turner adds. Nonetheless, this is what seeded the idea of doing a complete circumnavigation. 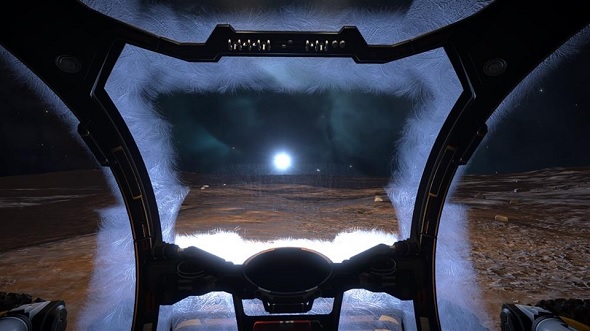 Turner found a planet, Pleione 3 A, which had a radius of 170km, about half the size of the one Sticks would later circle. “I expected it to be pretty epic,” Turner tells me. ”I knew it was going to take a while and I hoped it would both test and improve my ‘fliving’ skills” – a hard-to-pronounce portmanteau of driving and flying – “It was way more beautiful than I’d imagined, though.” To save fuel, Turner turned off most of the rover’s systems, which meant his windscreen would frost over – “I had ice crystals on the windscreen which tended to sparkle like glorious winter mornings.” As someone who enjoys skiing, Turner says he gets “really moved by those bright mountain valley views.”

Turner used his unconventional journey to raise money for charity, treating the expedition like a sponsored walk. Each day, he documented his progress and directed people to his donation drive for Special Effect. The community jumped on it – “suddenly I had all these people following the story and donating money. It was incredible, I think we raised something like £350 in the end.”

Turner sped across the planet managing to circle it within a week but news of what he was up to spread and he had company by the end of his trip. “A day or two before the end a few other commanders (including Tannik) managed to find me and completed the journey with me. It was really special and quite emotional.” 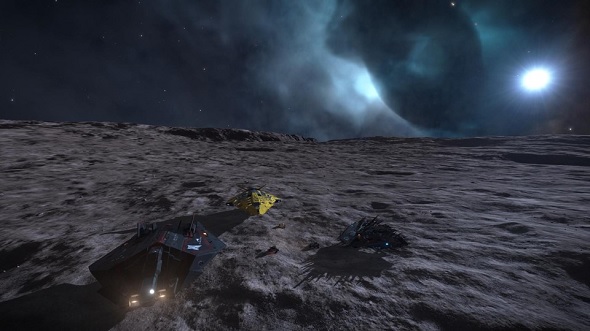 Another commander that joined Turner was Sticks, who was inspired to start his own journey.

Sticks had wanted to circumnavigate a planet ever since the Horizons expansion added planetary landings at the tail end of 2015. “I just wanted to see if it was possible,” Sticks tells me. He even made an attempt shortly after the update released but gave up after a week: “there were no materials to gather so no on-the-ground SRV refuelling or repairs [and] I suspect the planet was too big.”

Then, late last year, “I spotted in the forum that Alec Turner was doing his circumnavigation,” Sticks says. “He was doing it right – he had chosen a small planet.” He had also made it a public event so he was drawing support from the community. Sticks flew out to the planet Turner was trying to drive across in a rover and joined him for the last few sessions. “Even though I knew roughly where he was and his heading it was still very difficult – the SRV really is a small dot on the surface.”

Sticks had a great time and decided to try again, this time finding a less spherical planet.

“I was on my way back from exploring a nebula out Colonia way and was just scanning all planets in unexplored systems to put my name on them,” Sticks tells me, explaining how he found Eol Prou FB-I b25-50 1. “This one fitted the bill in so much as it was about the right size, but also it looked interesting as it wasn’t completely round, it was like a potato.” 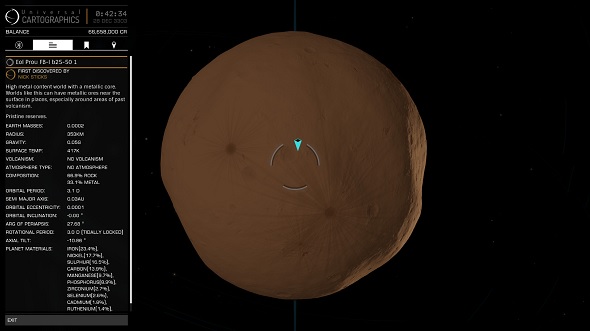 Potato isn’t an official term but it’s an apt one. The makers of Elite Dangerous, Frontier Developments, do not handcraft every planetary body in the game. They are, instead, each generated algorithmically in order to populate the galaxy with hundreds of thousands of planets. This generative process saves time but players have found it can lead to some dull planets.

“You can’t get funny-looking rocks with a radius smaller than around 200km,” Elite player Varonica writes on the game’s forums. “There’s something with the planetary mesh that prevents bumps and depressions at less than that radius. In fact the bumpiest bodies tend to be in the 300km to 500km radius, larger than that and they smooth out due to gravitational attraction, smaller than 200km radius they smooth out due to technical issues with the planet mesh, so it appears [Sticks has] selected an ideal potato.”

On December 27th, Sticks started his journey from the centre of a crater on his potato planet. With his rover getting up to 30kph on the flat, but more often averaging 15kph, Sticks was settling in for a long journey. And this is back when he was planning on driving in a straight line. 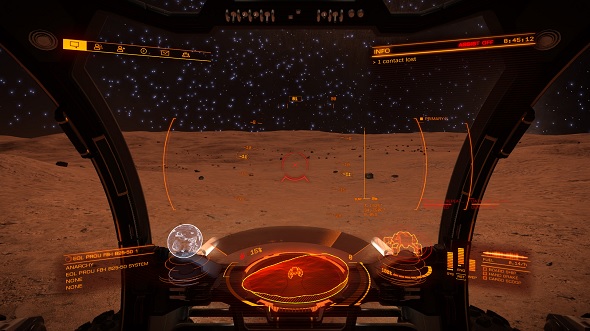 A week into his journey he had covered 225km. “For a lot of the time there were no sights, it was pretty flat with just the odd crater to break up the journey,” Sticks tells me. “Seeing a mountain or a large hill was a luxury. Then there would be the bumpy zones which slowed you down.”

Sticks would map his route as he went – “I never picked where I would finish before starting” – and would find good places to stop as he went. “For example, the centre of a crater seems like a good place to stop or right before a large feature like a mountain or a valley system.”

Despite the largely vacant expanses, driving the SRV took up a lot of Sticks’ attention – “You have to constantly adjust your heading to keep on track and if you did look away a big rock would jump in your path and you would crash into it.”

For a planet without an atmosphere, Sticks encountered a surprising amount of life, too. Remote sentinel drones guarding abandoned cargo, pop up research stations, and, on January 7, he found pirates.

Sticks came across the rusting carcass of an SRV. Scattered around the dead rover were cargo crates packed with silver. Looting the space chests, Sticks continued on with his journey for a few kilometres when he heard “Ship scan detected.” They attacked the next day. 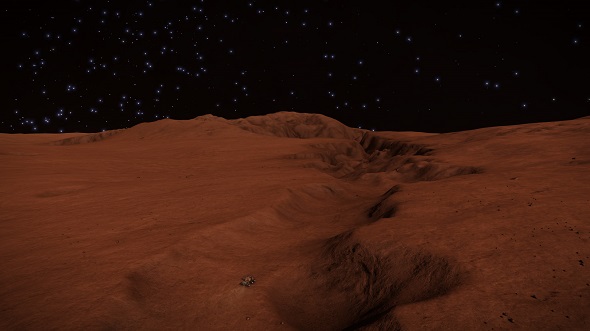 Sticks had to call in his ship to try for a hasty retreat. He dropped the silver out of his cargo hold, hoping it would draw away the pirates but, because he forgot to raise his landing gear, he was not able to boost to safety. “There was bright flash and I woke up at Eavesdown Docks,” Sticks wrote in a forum post.

Sticks did not raid any of the cargo canisters he found after that.

Originally, Sticks had planned on circling the planet in a straight line, only deviating to visit the points of interest flagged up by his radar (cargo containers, spaceship wrecks, and so on). Around the same time as the pirate attack he changed his route, drawing a line around the planet that would take him to Eol Prou’s pockmarks – craters, valleys, and mountains. “To spice the trip up,” Sticks explains to me. It would add hundreds of kilometres to the trip, days of driving, and make for a more challenging expedition, but it would take him to the planet’s biggest sights.

“The sights were spectacular along this detour, particularly through the valleys,” Sticks says.

Though one of the challenges of the later valleys, particularly when the planet had rotated just so, was that no light reached the valley floor:

You can see just how dark it would get in this video:

“Driving in the dark did have its problems as it was easy to get lost when you were in a valley,” Sticks admits. “Having said that I still got lost when it was light!

On Valentine’s Day, Sticks was out of the dark of the valley and crossed the 2,000km mark. Nearly two months into the expedition, he became more focused. “I’m not investigating every radar signal anymore just those that are on my immediate route,” Sticks wrote on the forums. “If I see a ship in the distance and it’s more or less in the right direction I will check it out.”

Sticks’ journey was almost ended again a few days later, this time after he destroyed a drone that was being guarded by an AI-piloted Viper. The heavily-armed ship chased and fired on Sticks’ defenseless SRV. The ship pursued him for more than ten minutes, before Sticks managed to escape. He caught the whole thing on camera, too:

The final weeks of the trip were uneventful but you can see in Sticks’ forum posts that he was finding his groove. His photos begin to capture the true scale of his journey, with high aerial shots showing how insignificant his SRV was in comparison to barren planet – only a speck trailing tracks in the dust for thousands of kilometres:

After such a long time on the planet, Sticks was regularly seeing the same objects randomly spawned in by the game. For players that make short trips to a planet’s surface, these instances are fresh and various, but he had seen them over and over. He started to create the variety in the environments that he was otherwise losing out on, instilling each with personality. In his forum posts, Sticks would talk of the crashed satellites’ databanks being full of old Earth music like Alice Cooper, Hawkwind, and The Tubes.

Then, finally, on March 5, Sticks arrived back at the beginning:

On the forums, Sticks was understated about his achievement: “Well, that’s it I’ve finished my epic journey and feel quite pleased.” 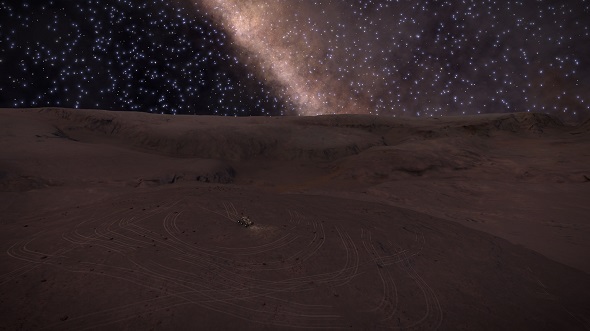 Sticks’ arrival meant he got to join The Planetary Circumnavigation Club, a small hall of fame started by Turner that collects together the diary threads of players who have completed similar journeys. There are currently only nine verified members, with another unconfirmed and one disallowed (don’t ask) but it is set to continue growing. Commander Kris is driving round a moon that’s even larger than Sticks’ planetwhile Commander Bomba Luigi is preparing to loop a planet that is a whopping 579km. They’ve nicknamed it Wilson.

The group may never grow very large, then, but the players who do embark on such adventures are amply rewarded. Months after completing his own circumnavigation, the one that kicked everything off for Sticks, Turner’s presiding memory from the journey is “seeing the little mound in the middle of that crater where I first started out from. When I crested a hill and saw that again I have to admit I shed a tear. I know it’s only a stupid game really, but there was something profoundly powerful about that moment.”