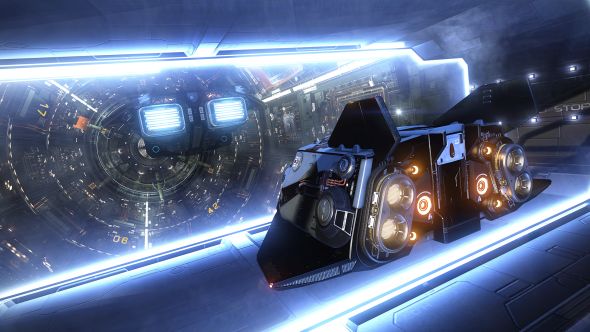 After achieving its funding goal on Kickstarter, a pen-and-paper RPG based on Elite Dangerous faces an uncertain future thanks to a copyright claim. Its crowdfunding campaign has now been taken down, and it’s not clear what will happen to the project.

The Elite: Dangerous RPG had raised £65,000, which was £20,000 more than its target, with five days left to run on its crowdfunding campaign. That clock has now been paused while the dispute is resolved – fortunately, since Kickstarter backers are only charged when a campaign ends, no one has lost any money.

The campaign was paused on Friday, as creators Spidermind Games learned in an email from Kickstarter informing them that a copyright claim had been filed. You can see some of the details for yourself if you head to the Kickstarter page.

The claim cites Elite, the original 1984 game upon which Elite Dangerous is based, as the copyrighted material upon which the RPG infringes. The sender of the claim is private, but Eurogamer says it came from Chris Jordan, a long-time associate of Ian Bell, the co-creator of the original Elite alongside David Braben.

Jordan accuses Spidermind of “commercially exploiting the work of the one man without which Elite would never have existed, without permission, credit or even mention. Given you say you are an Elite player and fan, I’m assuming your omission isn’t through mere ignorance.”

Jon Lunn, producer of the RPG, says his project was licensed to Spidermind Games by Frontier, the developers of Elite Dangerous. David Braben is their CEO.

Jordan’s email says “if you believed Frontier Development’s claim to own all the rights to the Elite game (e.g. page 101, you should know this claim is false and was recently retracted).” That link leads to an IP assignment agreement by Frontier, in which the wording was changed to apparently retract Braben’s claim on “all” the rights to the Elite games. Frontier say the change “is a minor point and not material to Frontier’s business”.

Spidermind and Frontier’s lawyers are working to resolve the situation.

This article has been amended to clarify that none of the Kickstarter’s backers have been charged.