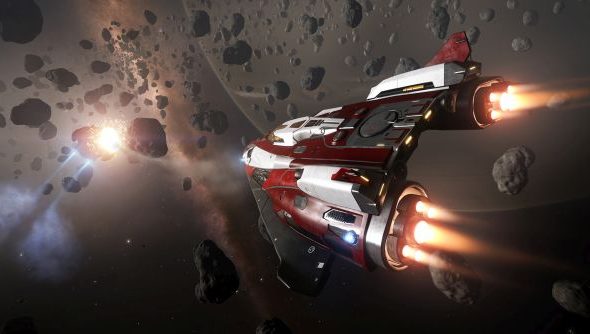 That’s an awful lot of smuggling operations. Elite: Dangerous developers Frontier send word that their space adventure has done rather well over the past couple of years of development and release, selling 1.4 million copies. They wanted to make it clear that the number isn’t boxes shipped to stores or registered accounts, it’s purely the number of times a copy of the game has been paid for. At around sixty dollars a pop, that’s some serious moolah.

Elite, along with its notable competitors, pops up on our list of the best space games.

That isn’t just on PC of course, with Xbox One and Mac taking some amount of the strain as well. It’s fairly easy to see how it’s done so well, being the only big-budget game of its kind in full release for the past few years, offering all the fantasies many were asking for.

David Braben, CEO of Frontier and long time space-man, had this to say in an official statement:

“We have an amazing player community. The average play time among our 1.4 million players is 60 hours – that’s a massive 84 million player hours and counting. With the community’s feedback, we’re constantly making Elite Dangerous better than ever. We have incredible long-term ambition and we will continue to deliver on those ambitions. We will detail more exciting developments for Horizons very soon.”

Those player time numbers are pretty extraordinary when you factor in how many players never even get the first achievement on Steam in most games – usually about 20% of the folks that own it. A quick browse of the reviews for ED on there reveals 200 hours or more as a regular occurence, with much higher hardly a rarity. And that’s just the people who’ve marked it Not Recommended.

With all that cash, Frontier will have plenty of other projects on the go. We’ll hear more from them soon.