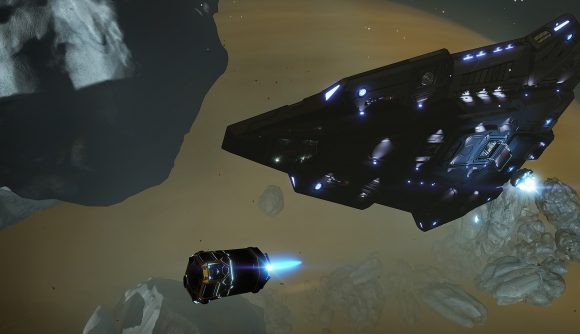 The latest reveal stream for Elite Dangerous: Beyond – Chapter Four has wrapped up, offering a detailed look at what’s coming with mining and Squadrons. Digging for space minerals is about to get a lot easier and more lucrative, and Squadrons will give players a much more convenient way of banding together to explore the galaxy as a unit.

Creating a Squadron costs 10 million credits, and the commander who makes it will automatically become Squadron Leader. At creation, you can set your Squadron’s name, a four-character ID tag, and affiliation among the superpowers, powers, and factions. You can set tags to help prospective players find your group – specific examples include ‘PvP,’ ‘German Language,’ ‘Open,’ ‘Explorers,’ ‘Weekends,’ and ‘Li Yong-RUI.’

Each Squadron can have up to 500 members, which are split among five ranks: Leader, Senior Officer, Officer, Agent, and Rookie. Those are just a baseline, as the Squadron Leader can change the names of the ranks and adjust their privileges. Those privileges are pretty standard for online moderation, including options like kicking players, sending invites, setting statements, and deciding who has access to the officer chat channel.

The folks at Frontier say “the Elite Dangerous community have created so many incredible out-of-game ways to organise how they play Elite Dangerous in player groups, and we would never dream of removing or replacing those systems, but Squadrons offers something for any type of player.” They specifically cite the Fuel Rats in saying that “the Squadron tools can be used in addition to the systems you’ve already put in place outside of the game supplementing the activity you already engage in.”

The other side of this reveal is mining. You can use the Pulse Wave Analyzer to quickly highlight asteroids with especially valuable deposits. A Prospecting Limpet will highlight the location of those deposits on asteroids so you can target them more specifically.

New tools will help you gather resources more efficiently. The Abrasion Blaster can easily break off surface deposits. The Sub-surface Displacement Missile, appropriately, drills into sub-surface deposits to get at the goodies underneath. When you need to do some truly heavy-duty mining, you can use the Seismic Charge Warhead to completely blast apart an asteroid and collect the resources within.

We’ve gotten some time with many of the changes coming in Beyond – Chapter Four, and you can read plenty in plenty more detail what exploration changes and scenario missions bring to the game. We’ll shortly have some similar impressions of what Frontier detailed today, and you can look forward to seeing it all for yourself when the next big update launches.