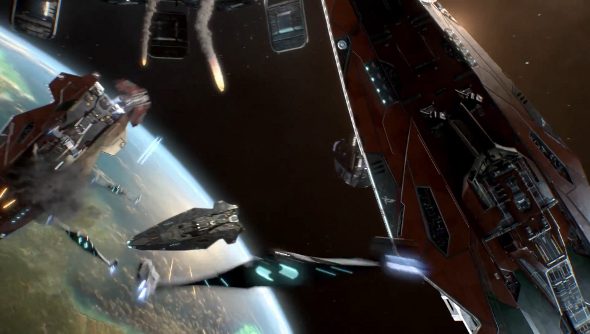 Elite: Dangerous will be receiving its 1.1 update in February, and headlining the list of additions is something called ‘Community Goals’. These new objectives are designed with multiplayer in mind, and will hopefully begin to rectify Elite’s problems with playing as groups.

Community Goals will be custom objectives designed to give all players a common mission. Talking to PC Gamer, executive producer Michael Brookes said “Community Goals are a new type of story-driven collaborative event.”

“Already players are working together to influence power struggles in our galaxy, but Community Goals are a shared objective we can generate to allow vast numbers of players to collaborate towards the same goal.”

With its online structure, various different Community Goals can be added to the game whenever developer Frontier likes. As such it appears that goals will turn up in waves, with the first batch being focussed on supply and bounties.

“A faction might task our pilots with racking up a number of kills in a particular system, effectively sending massive numbers of players to war for or against particular group,” explained Brooks about bounty goals.

As for supply goals, Brooks said that many players could get involved in aiding a system plagued by famine: “A Community Goal will be created to supply the food within a set time limit, and if the players achieve the goal then they’ll save the population. And whether they succeed or fail will have ramifications for the balance of power in the galaxy.”

Elite: Dangerous can be a lonely experience, and the current lack of cooperative options doesn’t help even when you can meet up in virtual space with other friendly pilots. Hopefully Community Goals is just the start of more multiplayer-friendly features for Elite.

The 1.1 patch will also add a new shader to make gas giants look much prettier, and city lights that will be visible on the dark side of populated planets. People who bought Elite: Dangerous at beta will be able to access the patch early, but general release is early February.