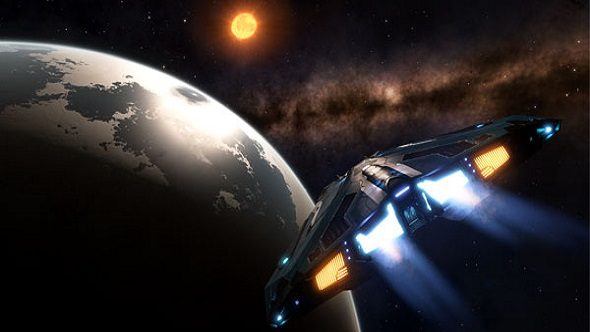 You can now explore the recently-discovered star system Trappist-1 in Elite: Dangerous, a month after the game’s creator David Braben announced it would be added.

Trappist-1 is a dim star recently discovered by NASA and has seven terrestrial worlds orbiting it, some of which have the potential to support life. What’s interesting about all this is that before anyone knew anything about Trappist-1, Elite: Dangerous’s planet generation engine, Stellar Forge, had created a similar system, essentially ‘predicting’ NASA’s discovery.

Elite: Dangerous’s system, sexily namedCore Sys Sector XU-P A5-0, has a star only a little smaller than Trappist-1, and only 39 light years away from its real location. It even has seven terrestrial worlds orbiting it. Braben explains this is because Stellar Forge uses ‘available mass’ to create its systems, “and because of this unaccounted mass, Stellar Forge has created a system with a brown dwarf in very nearly the same place”.

YouTuber ObsidianAnt has a video checking out the new ‘hood, and comparing it to the original Core Sys Sector XU-P A5-0. If you missed Braben’s announcement, read on for our original story.

Original story February 25, 2017:Following NASA’s landmark discovery of seven Earth sized planet orbiting the red dwarf star Trappist-1 approximately 40 light years away, many games set in our own galaxy are set to update their star maps to include this new system. One of these games is Elite: Dangerous, with developer Frontier announcing that this potentially habitable solar system will be present in the upcoming 2.3 update for the space faring simulator.

In a post over on the Elite: Dangerous forums, Frontier CEO David Braben announced that Trappist-1will be present in Elite’s ‘Commanders’ update, complete with information accurate to the newly discovered system. What’s more interesting is that Elite’s system for generating exoplanets, Stellar Forge, had actually created its own similar solar system, near the location of the real life Trappist-1. The system the Stellar Forge had created was located around 39 light years away, had a brown dwarf star at its centre (which is only slightly smaller than a red dwarf) and also had seven planets orbiting its central star.

The solar system generated in Stellar Forge has some extra details which NASA has been unable to detect just yet, like extra moons and orbiting binary pairs. However, future observation of the real Trappist-1 system could also reveal that there are moons there, similar to the ones generated by the Stellar Forge. These as yet unverified moons will be present in Elite: Dangerous’ version of Trappist-1, but expect elements of the system to change as NASA gets more information.

While the system has only just been added to the game, it would not be surprising if Frontier hid something special in this potentially habitable star system. With update 2.3 bringing a whole host of new features like a new camera system, the Commander creator, the ability to join friends to fly in a single crew and the long awaited ability to actually name your spaceship, the addition of the real life Trappist-1 is the cherry on top of an already massive cake.