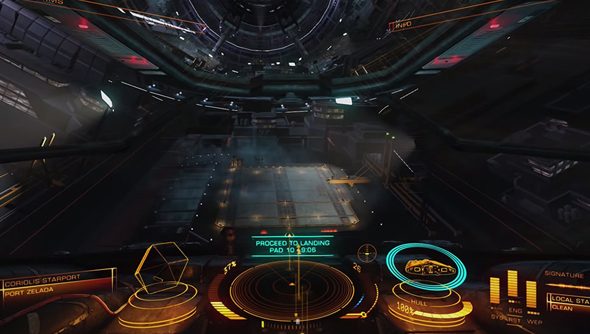 While our own universe will eventually shrink to the size of a thrupenny bit, Frontier’s version of space only pushes further outwards.

Elite: Dangerous docked at standard beta this week, growing to a total of 50 systems over a 21 lightyear radius and asking its players to worry about fuel consumption for the first time.

Nobody could possibly complain about the speed at which Frontier have gone about realising their Kickstarter pitch. But Braben’s bunch aren’t resting on their Lakons – they’ve already tackled a long list of bugs in the beta.

The changelog for Beta Update 1.03 appeared on the Frontier forums an hour ago, and the patch should already be available to download.

Some of the standard beta’s biggest additions were missions, and they’ve been subject to their expected share of problems. The developers have now fixed some collect missions that had their destinations confused with their departure points, and sorted some broken objective pointers.

They’ve also switched some key bindings for gamepads, which is interesting. Do any of you lot fly spaceships with Xbox controllers, or do you prefer to dogfight with a good old-fashioned joystick?