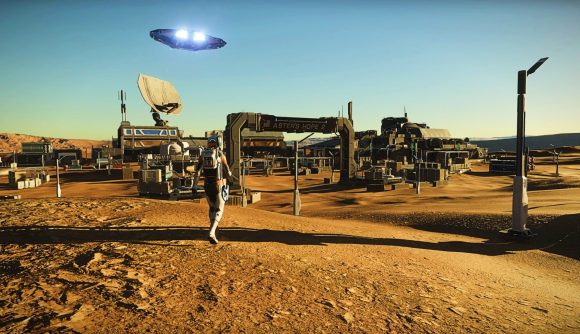 There’s a new patch out today for Elite Dangerous: Odyssey, and the notes for it are so long they take up two full Steam posts. The 5.8 GB patch for the huge space game adds several new features and fixes some of the remaining issues introduced with the launch of the Odyssey expansion, which itself added first-person exploration and combat to Elite Dangerous.

Each of these is broken out into more detail in the two patch posts. Shared missions are the big new feature, as every mission added in Odyssey can now be undertaken together with your teammates. You’ll see a ‘share’ button on all Odyssey mission entries in the transaction panel if you’re on a team, and if you decide to share, your teammates will have the option to accept or reject your invite.

One confusing detail in the notes on shared missions is the line that says items extracted by teammates during a shared mission will be automatically moved to the mission-owner’s inventory when you embark on a ship or otherwise leave the mission area. Frontier has clarified that this applies only to mission-critical items – so if someone else picked up an objective item, the ‘team leader’ will gain control of it when you all leave the vicinity.

Elite Dangerous: Odyssey Update 5 is now available on the Elite Dangerous launcher. Click here to read more about what is included in this update: https://t.co/6EJf0GVsKB pic.twitter.com/C6urT4HkJS

Some improvements have been made to Odyssey’s VR experience. The notes list fixes for a black screen issue when respawning in a combat zone, and for the problem with the ‘maintain horizon’ option on SRVs not working properly. However, while it’s not listed in the changelog, users on Reddit report that the offset bug when using the Detailed Surface Scanner (DSS) in VR has also been addressed.

Players appear to still be having issues with performance since the latest patch, however. Odyssey’s launch has been a rough one on PC: Frontier’s CEO has apologised for the state it arrived in, and several patches have already been deployed to address issues players encountered in the expansion.