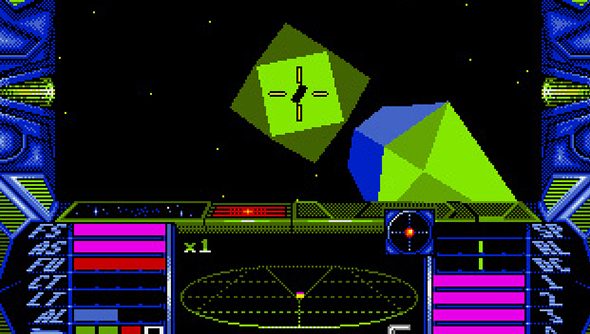 Hidden in plain sight on Elite co-creator Ian Bell’s homepage is a semi-complete Elite musical, with tunes from the developer’s brother Aidan Bell and lyrics by writer Brian Phillips. The musical, which as far as I can tell never entered production, is simply titled Elite: The Musical — The Elite Musical and it’s brilliant. It’s about some space folks who head off into the stars in pursuit of a notorious pirate, with unexpected twists and turns along the way.

You’ll laugh, you’ll cry, you’ll damn the cruel universe that did not allow this to reach the West End. There’s a plot synopsis if you’d rather not try to guess how all the songs work, but otherwise, here are some of the best bits.

Here’s a verse from the final song of the show, by a character called Bindweed, whose a sort of gin-soaked Han Solo as far as I can surmise. He loves space. Can’t get enough of the stuff.

Well son of a bitch
I made it rich
Those amphiboids are generous creatures.
Now I’m, back in space
And thats the place
To practice what I preaches

To open the show Bell links to a MIDI file of the Elite theme, which he requests to be performed in full John Williams orchestral style, before we’re introduced to the space-jobbing duo of Maple and Hawthorn.

Here’s a lovely bit (including an inexplicable note from Ian Bell himself) in which Maple enquires about the ship the pair will be using in their mission to assassinate a space pirate.

MAPLE
Which ship do we undercover in, to kill Cleavers?

HAWTHORN
Get excited, Doomchild [“Do we child?” better IMV -ICGB]
It’s a Cobra Markthree,
You’ll soon see
Customized and able to face any challenge
All emergencies
We’d meet in the galaxy.

She’s hot
‘Cause she’s got
Every single weapon you would care to name
She’ll outrun and outgun
With her it’s no war, it’s really more a game.

Ian’s notes appear infrequently throughout, sometimes with more legible intentions. Here he is applying his unique expertise to a line in which Maple asks about the Cobra’s specifications.

MAPLE
Has she got a rear pulse laser? [Upgrade to Beam or leave as a gag?? – ICGB]

Following this a note appears suggesting that the next scene, which is set aboard the bridge of the Cobra Mk. III, be set to “Jean Michel Jarre style underscoring”.

The sci-fi soundscapes are eventually brought to a crashing close however as my personal favourite number, a song called Sniff of Exotic, kicks in. This sets the scene of a busy marketplace, full of the bustle of traders, each one popping in with their own line and foisting merchandise on our unwary heroes before spinning away off the stage.

This is too brilliant.

HIGH TRADERS
Sex, pain, orgasmabox,
Pleasure pads serving lusto-studshoks;
Slaves sold, as cheap as life
All of which is here.

Which is all a bit Neil Hannon really.

Elite: The Musical — The Elite Musical gets much better and much worse than what I’ve quoted here, but it’s always great fun throughout, a tongue in cheek space romp that probably deserved better. Give it read if you like, or wait for PCGamesN to raise enough cash to stage a performance at a theatre near you.