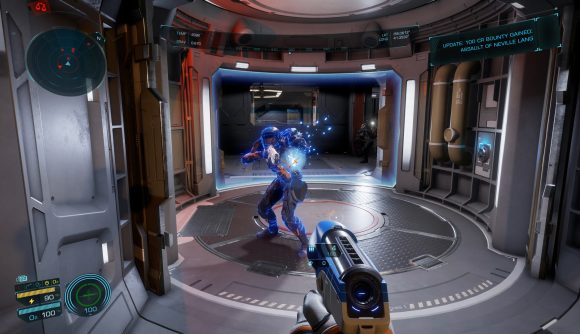 One of the main issues that’s plagued Elite Dangerous’ ambitious first-person Odyssey expansion has been performance – it’s tough to keep the space game running at a nice framerate while you’re roaming the space game’s planets on foot. Frontier Developments has released a new patch for Odyssey and Horizons today that improves optimisation and squashes some pesky bugs.

In Odyssey, the developers have improved optimisation for several features, including cockpit and other transparent glass surfaces, galaxy and star maps, avatar decals, forward-lit visual effects, fine textures on planets, shadows, and emissive rescaling. The upshot of all this is that these things shouldn’t hit your framerate quite as hard now, hopefully producing a smoother gameplay experience.

Frontier says it’s also fixed a few bugs, notably an issue that popped up while running with cutting tools. This is generally a bad idea for other reasons, but the game shouldn’t throw a fit when you try it from now on. The team also says it’s addressed a “quantum physics issue” that apparently would happen when multiple players attempted to grab the same item – the devs don’t say what exactly was happening, but we’re just going to assume it’s a timeline split that’ll have to be resolved in act three.

Servers were down for a few hours while the patch was deployed, but they’re back online now.

⬆️ Elite Dangerous servers are now back online and the updates for Odyssey and Horizons are available to download.

You can read more about the update on Steam. Still to come are the working fleet carrier interiors, which are due to show up in Update 11.